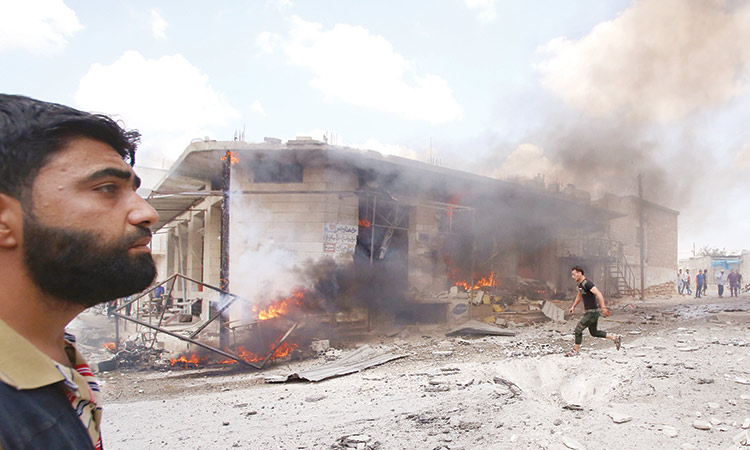 Regime air strikes on Tuesday killed 11 civilians in opposition-held northwest Syria, the target of months of bombardment by the government and its ally Russia, a war monitor said.

Three children were among 10 civilians killed in the village of Maar Shureen in the south of Idlib province, said the Syrian Observatory for Human Rights.

An AFP photographer said the strike hit near a mosque in the centre of the village, destroying vegetable stalls and shops.

Another man was killed in regime air strikes on the northern countryside of nearby Hama province, according to the Britain-based Observatory, which relies on a network of sources inside Syria.

Russian and Syrian regime aircraft have ramped up strikes on Idlib since late April, killing more than 600 civilians, while 52 others have died from rebel fire, according to the monitor.

Government forces have also been locked in battle with militants and allied rebels on the edges of the bastion, which is held by Syria’s former Al-Qaeda affiliate Hayat Tahrir al-Sham, including the north of Hama province.

The group in January took full administrative control of the Idlib region, home to three million people, although other extremist groups and rebel factions are also present.

Idlib and its surrounding areas are supposed to be protected from a massive regime offensive by a September 2018 deal between Russia and rebel backer Turkey.

A buffer zone planned under that accord was never fully implemented, and the region has seen an uptick in violence.

Syria’s war has killed a total of more than 370,000 people and displaced millions since it started in 2011 with a brutal crackdown on anti-government protests.

The opposition-allied first responders, also known as the White Helmets, say another 15 people were wounded in the strikes on a market in the village of Maar Shureen.

Opposition activists as well as the Britain-based Syrian Observatory for Human Rights are also reporting Tuesday’s deadly attacks. The Observatory, which monitors Syria’s civil war through a network of activists on the ground, says 10 civilians were killed, including three children.

Idlib is the last major rebel stronghold in Syria’s eight-year civil war. Government troops backed by Russia have been unsuccessfully trying to advance on the edges of the area in recent months.

Months after the territorial defeat of the Daesh group, Syria’s Kurds are pushing for an international tribunal to try alleged militants detained in their region.

The Kurds run an autonomous administration in the north-east of Syria, but it is not recognised by Damascus or the international community.

This brings complications for the legal footing of any justice mechanism on the Kurds’ territory, and the international cooperation required to establish one.

The Kurdish authorities say they are seriously exploring how to set up an international tribunal, and invited foreign experts to discuss the idea at a conference it hosted early this month.

“We will work to set up this tribunal here,” the region’s top foreign affairs official Abdelkarim Omar told AFP afterwards.

“The topic of discussion now is how we will set up this tribunal and what form it will take,” he said.

Daesh in 2014 declared a “caliphate” in large parts of Syria and neighbouring Iraq, implementing its brutal rule on millions.

The militants stand accused of crimes including mass killings and rape, and a UN probe is investigating alleged war crimes.

Mahmoud Patel, a South African international law expert invited to the July conference, said any court should include input from victims and survivors.

It should be “established in the region where the offences happened so that the people themselves can be part of that process”, he said, preferably in northeast Syria because the Kurds do not have the death penalty.

In Iraq, hundreds of people including foreigners have been condemned to death or life in prison.

In recent months, a Baghdad court has handed death sentences to 11 Frenchmen transferred from Syria to Iraq in speedy trials denounced by human rights groups.