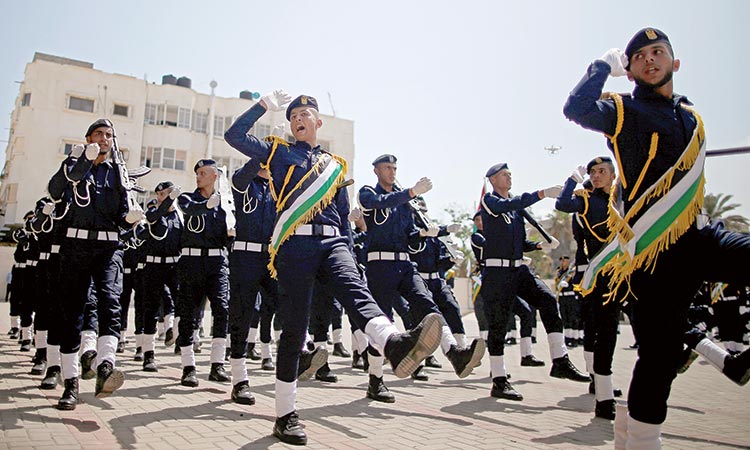 Palestinian police cadets march during a graduation ceremony at a police college in Gaza City on Tuesday. Reuters

Diplomats from around 20 mostly European countries toured the area where the demolition orders have been given on the grounds the buildings are in a security zone near Israel’s separation barrier cutting off the occupied West Bank.

The buildings, most of which are still under construction, are located south of Occupied Jerusalem in the Sur Baher area.

Palestinians accuse Israel of using security as a pretext to force them out of the area as part of long-term efforts to expand settlements and roads linked them.

They also point out that most of the buildings are located in areas meant to be under Palestinian Authority civilian control under the Oslo accords.

“When the house is demolished, we will be in the streets,” Ismail Abadiyeh, 42, who lives in one of the buildings under threat with his family, including four children, told the diplomats.

French consul general for Jerusalem, Pierre Cochard, told journalists he did not think the security explanation provided by Israel was sufficient to move ahead with demolitions.

“I think it’s important to underline that we cannot deny their right,” Cochard said, referring to the families living in the homes. “They are here in Palestinian territory.” Palestinian governor of Jerusalem Adnan Gheith said “we are looking for serious actions from your governments to stop these continuous crimes.” An Israeli high court ruling last month dismissed a petition by Palestinian residents requesting the cancellation of a military order prohibiting construction.

On June 18, residents received a 30-day notice from Israeli authorities informing them of their intent to demolish the homes.

According to UN humanitarian affairs agency OCHA, the ruling affects 10 buildings already built or under construction, including around 70 apartments.

Some 17 people would be displaced and around 350 others affected, OCHA said.

Residents fear another 100 buildings in the area in a similar situation could be at risk in the near future.