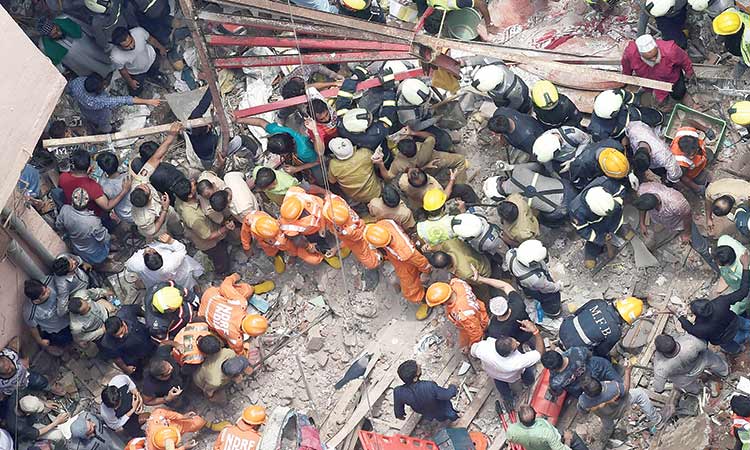 Rescuers search for survivors amid debris after a building collapsed in Mumbai on Tuesday. Agence France-Presse

“My condolences to the families of those who lost their lives,” Prime Minister Narendra Modi tweeted earlier in the day.

“I hope the injured recover soon.”

Another 10-odd families are still believed trapped under the rubble of the Kesarbai Building in Dongri area after its rear illegal portion came crashing down around 11:30am.

Chief Minister Devendra Fadnavis ordered a probe into the building crash and assured strict action against those found guilty.

They demanded a detailed investigation into the causes leading to the accident, identifying the culprits and booking them under charges of culpable homicide not amounting to murder.

Meanwhile, an RTI activist said that the name of the dilapidated structure, is mysteriously omitted from a comprehensive list of 499 “dangerous” buildings prepared by the BrihanMumbai Municipal Corporation (BMC).

“The BMC, as per the directions of the Bombay High Court, had compiled the list of the dilapidated buildings, which we secured through a RTI reply. Shockingly, Kesarbai Building’s name is not mentioned anywhere in the list,” Shakeel Ahmed Sheikh told reporters.

In a statement, she said that the main dilapidated structure, Kesarbai Building 25/C was completely evacuated by the MHADA last year and the building which collapsed on Tuesday “was the illegal rear portion of this building which is not within the purview of the Mumbai Building Repair & Reconstruction Board”.

Earlier in the day, MBRRB Chairman Vinod Ghosalkar had said that the dilapidated structure, believed to be over 80 years old, had been handed over for redevelopment to B.S.B. Developers, which has not yet started the work.

“This is a serious matter and we shall investigate why the redevelopment work was not initiated, what caused the delays and take appropriate action against those responsible,” Ghosalkar told reporters.

Among those rescued from the debris include five women, three men and two children aged 3 years each.

They are being treated at various hospitals and the two minor males were discharged after treatment.

As a precautionary measure, the police evacuated all residents of an adjoining building and shifted them to a nearby school to facilitate the relief works.

Narrow and crowded lanes leading up to the site in Dongri made it challenging for rescue equipment to reach the collapsed building, said PS Rahangdale, the Mumbai fire department’s chief public relations officer.

Around 15 families were believed to be living in the building that collapsed on Tuesday morning, said Mumbai’s Deputy Commissioner of Police Manjunath Singe.

“Rescue operations are ongoing and our main focus is find those trapped,” he added.

Residents in the neighbourhood helped fire and other officials with the rescue efforts, with some helping carry the injured to nearby ambulances that could not reach the site, a Reuters witness said.

The collapsed building was nearly 100 years old and an investigation into the incident will take place, said Devendra Fadnavis, chief minister of Maharashtra state, where Mumbai is located.