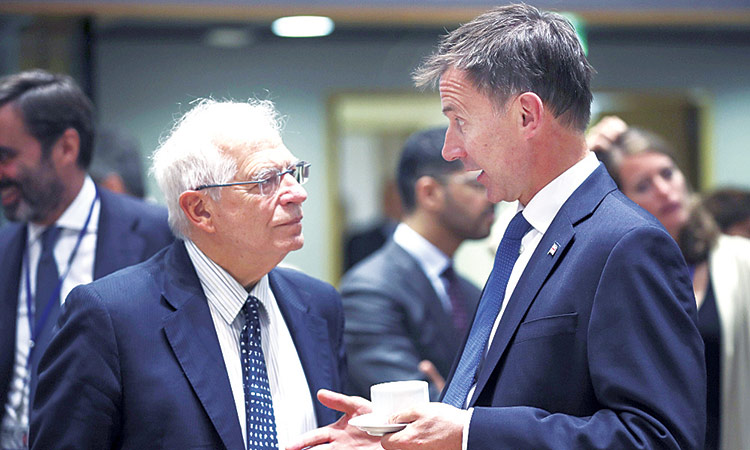 Jeremy Hunt talks to his Spanish counterpart Josep Borrell during a meeting in Brussels on Monday. Associated Press

US-Iranian tensions have worsened since US President Donald Trump decided last year to abandon the nuclear deal under which Iran agreed to curtail its atomic programme in return for relief from economic sanctions crippling its economy.

“Iran is still a good year away from developing a nuclear bomb. There is still some closing, but small window to keep the deal alive,” Foreign Secretary Jeremy Hunt told reporters on arrival for a foreign ministers’ meeting in Brussels.

The Brussels meeting will seek to flesh out how to convince Iran and the United States to reduce tensions and initiate a dialogue amid fears that the 2015 deal is close to collapse.

In reaction to the re-imposition of tough US sanctions, which have notably targeted Iran’s main oil revenue stream, Tehran has reduced some of its nuclear commitments under the deal, leading the European parties to the pact, France, Britain and Germany, to warn it about not fully complying with the terms.

When asked whether the European powers would seek to penalise Iran for breaking parts of its nuclear commitments, Hunt said they would seek a meeting of the parties to deal with it.

“We will and there’s something called a joint commission, which is the mechanism set up in the deal which is what happens when one side thinks the other side has breached it, that will happen very soon,” he said.

Iran denies ever having sought a nuclear weapon.

In Tehran, Iran’s nuclear agency said Iran would return to the situation before the nuclear deal unless European countries fulfilled their obligations.

“These actions are not taken out of stubbornness but to give diplomacy a chance so the other side comes on its own and fulfills its duties,” the agency’s spokesman Behrouz Kamalvandi said.

“And if the Europeans and America don’t want to fulfill their commitments we will create a balance in this deal by reducing commitments and return the situation to four years ago.”

Iran says the European countries must do more to guarantee it the economic benefits it was meant to receive in return for curbs to its nuclear programme under the deal.

France’s Foreign Minister Jean-Yves Le Drian said Europe had to remain united in trying to preserve the deal, and said Tehran should reverse its decision not to comply with parts of it.

France, Germany and Britain, who are party to the deal alongside Russia and China, have sought to defuse the tensions, which culminated in a plan for US air strikes on Iran last month that Trump called off at the last minute.

French President Emmanuel Macron dispatched his top diplomat to Tehran last week to offer suggestions on how to freeze the current status quo to gain some time and had said he wanted to review the diplomatic progress by July 15.

Hunt, vying to become British Prime Minister, said that while he agreed with the United States on finding a long-term solution to Iran’s regional influence, he disagreed on Washington’s current approach and said Europe should do its utmost to help Iran and its economy if it sticks to its nuclear commitments.

The Europeans are still trying to set up their Instex mechanism, a conduit for barter-based trade with Iran, but an equivalent Iranian mechanism has yet to be established.

Should the mechanism go ahead it would initially only deal in products such as pharmaceuticals and foods, which are not subject to US sanctions.

Diplomats have that in any case they fear US blow back, while Iranian officials have repeatedly said Instex must include oil sales or provide substantial credit facilities for it to be beneficial.

“We will do what we can to guarantee that there is no economic embargo against Iran and that European companies can continue working there,” Josep Borrell, Spain’s Foreign Minister and EU foreign chief nominee told reporters.

“It’s very difficult because US laws applied in an extraterritorial manner, in a way that we don’t recognise, make it difficult,” he said, adding that Spain would join the Instex mechanism.

Rouhani on Sunday reiterated Tehran’s stance that it would be ready to negotiate if the US lifted sanctions and returned to the nuclear deal. Trump has shown no sign of backing down for now.