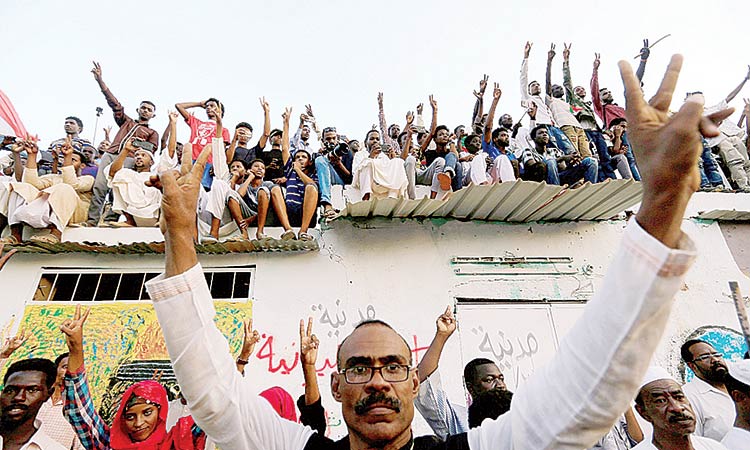 Sudanese people celebrate in Khartoum after the groups reached agreement to share power during a transition period. Reuters

Days after a blackout on mobile Internet services ended, Sudanese are shocked by the content of online videos and photographs that appear to document last month’s deadly raid on demonstrators.

Crowds of protesters were violently dispersed − and dozens killed − by men in military fatigues during a pre-dawn raid on a weeks-long sit-in outside army headquarters in Khartoum on June 3.

“The brutal scenes of killings and beatings left me very angry,” said Hussein Hashim, a 19-year-old university student from the capital’s El-Deem neighbourhood.

“The perpetrators have no mercy, religion or humanity.” Demonstrators who had camped at the site demanding civilian rule were shot and beaten as armed men rampaged through the area, triggering international outrage.

But the carnage went largely unseen inside Sudan as the country’s military rulers imposed a nationwide blackout on mobile Internet services.

Services were ordered to be restored after Khartoum based lawyer Abdelaziz Hassan won a case against 3G and 4G service providers.

“The aim of blocking the Internet was to hide information and evidence of what happened in the massacre,” Hassan said.

“It is the right of every citizen to know the real information so that he can form his own views.” One photograph, which could not be verified, has stirred particular anger.

It shows men in military trousers and boots putting their feet on the face of a purported protester lying on the ground.

Dozens of videos are circulating, including one that shows a group of men − also in military uniform − surrounding a teenage girl as she yells at a man who holds her neck in a tight grip.

Several videos show gunmen beating protesters with sticks as thick smoke billows from the protest site amid the sound of continuous gunfire.

AFP could not independently verify the origins of many of the photographs and videos, as most were posted on accounts that used pseudonyms.

Prior to the violent dispersal of the protest site, demonstrators had camped there since April 6, initially to seek the army’s help in ousting longtime ruler Omar Al-Bashir.