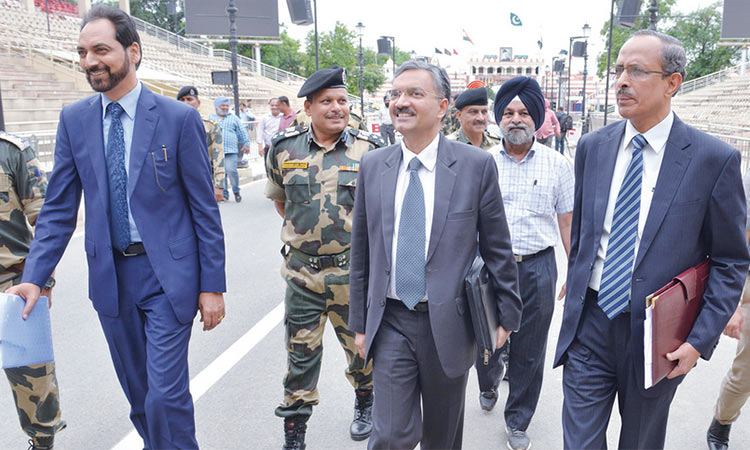 SCL Das (right), Deepak Mittal (centre) return to India after attending a meeting with Pakistani officials on the issue of Kartarpur at Wagah Border on Sunday. Agence France-Presse

Pakistan agreed to maintain a channel of communication towards the finalisation of the agreement on the modalities of the cross-border Kartarpur Sahib Corridor, assuring that “no anti-India activity would be allowed.”

The chief minister also requested waiver of passport to facilitate travel of devotees from the rural areas.

In a statement, Singh hoped that the Indian government would press Pakistan to accept other demands, being raised by him over the past several months.

The corridor is set to be completed by Oct.31 and could strengthen bilateral ties between the two countries.

During the talks, Pakistan highlighted the infrastructural constraints on their side and conveyed that they may be able to accommodate many of the Indian proposals in a phased manner.

Mohammad Faisal, a spokesperson for the Ministry of Foreign Affairs in Pakistan, told reporters at Wagha after the meeting that “an agreement between Pakistan and India has been arrived at over the above modalities. One more meeting is likely to happen.”

The Indian delegation also sought consular presence in Kartarpur Sahib gurdwara to be able to provide assistance to the pilgrims, if required.

“The Pakistan side assured our delegation that no anti-India activity would be allowed,” Das said.

India also raised its concerns over the security aspect.

The Kartarpur Sahib gurdwara across the Ravi river is built on the historic site where Guru Nanak Dev spent his final days. The place is highly revered by the Sikh community.

India also conveyed its concerns regarding the possible flooding of the Dera Baba Nanak shrine and adjoining areas on the Indian side as a result of earth filled embankment road or a causeway that is proposed to be built by Pakistan.

The MEA statement said that Indian facilities would handle 15,000 pilgrims a day. The work is expected to be completed by October 31, a week before the celebrations are expected to begin.

Pakistan highlighted the infrastructural constraints on their side and conveyed that they may be able to accommodate many of the Indian proposals in a phased manner, the MEA said.

India also urged Pakistan to allow “Nagar Kirtan” from Delhi to Nankana Sahib in Pakistan in July and in October-November as part of the celebrations to mark the birth anniversary of the first Sikh Guru.

The MEA said India has made significant progress to build a state-of-the-art infrastructure, including a passenger terminal, on the Indian side that can handle over 1,5000 pilgrims per day. It is targeted to be completed by Oct.31.

The work on the four-lane highway to the crossing point at the international boundary is progressing satisfactorily and is on schedule, the MEA said. The construction of the 4.2km long corridor will be over by end of September, well before the anniversary celebrations in India and Pakistan. A large portion of the corridor falls in Pakistan’s territory.

It is believed that the new travel directions will come into effect from Aug.11, 2020.