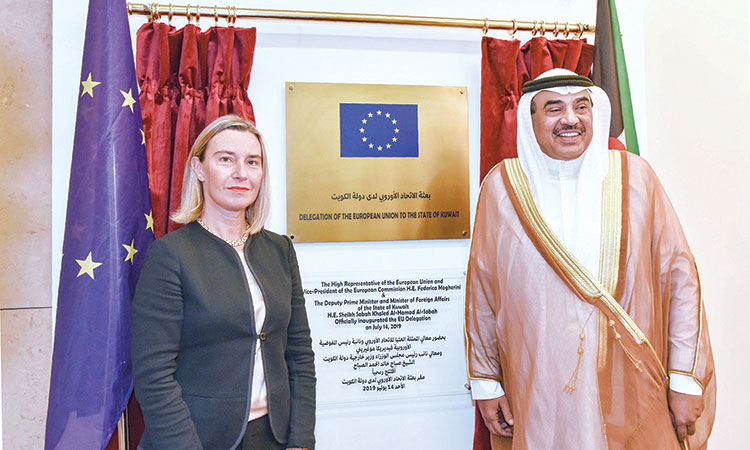 Sheikh Sabah and Federica Mogherini pose in front of a plaque during the opening ceremony of the European representative office in Kuwait City on Sunday. Agence France-Presse

The office in Kuwait’s tallest skyscraper is the third such EU mission in the Gulf, after Riyadh and Abu Dhabi.

“This also sends a message to the whole region; the European Union is increasing its presence and engagement in the Middle East,” Mogherini said at the opening ceremony.

The ceremony in the Al Hamra Tower, which is also home to the French embassy, was attended by Kuwait’s Foreign Minister Sheikh Sabah Khaled Al Sabah.

The opening, decided several months ago, comes amid a tense standoff between the United States and Iran which has affected the Gulf.

“In a moment of regional and global tensions, Kuwait is a voice of wisdom and force of peace and this is what made us natural partners,” Mogherini said.

Kuwait has strong relations with Brussels and Washington and, unlike Saudi Arabia and the United Arab Emirates, it maintains good ties with Tehran.

A joint cooperation protocol was signed “at an important period which the region is passing through security-wise,” Kuwait Port Authority manager Sheikh Yousef Abdullah Al Nasser al-Sabah was quoted as saying.

Sheikh Yousef said concerted efforts were needed to maintain the security of the Gulf state’s ports and “ensure full readiness for any potential emergency,” including training and exchange of experiences, according to the KUNA report.

Relations between Iran and the West have become increasingly strained after Britain seized an Iranian tanker in Gibraltar last week and London said its warship HMS Montrose had to fend off Iranian vessels seeking to block a British-owned tanker from passing through the Strait of Hormuz.