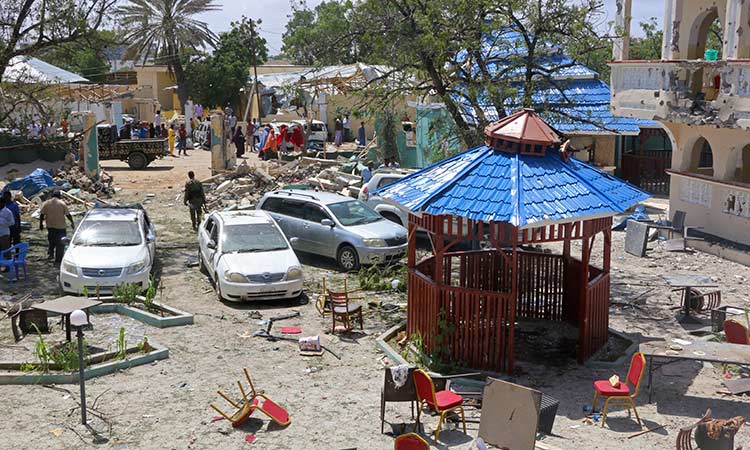 A view of Asasey Hotel after an attack in Kismayo, Somalia, on Saturday. AP

A suicide bomber rammed a vehicle loaded with explosives into the Medina hotel on Friday before several heavily armed gunmen forced their way inside, shooting as they went, authorities said.

It was the largest coordinated attack by the Shabaab in Kismayo since 2012 when it lost control of the city.

The victims included several foreigners and a prominent Somali-Canadian journalist, Nodan Halayeh, who perished along with her husband.

Three Kenyans, three Tanzanians, two Americans, one Briton and one Canadian were among the dead, president Ahmed Mohamed Islam of the semi-autonomous Jubaland region told a news conference.

"There are also two wounded Chinese citizens," he added.

The hotel was packed with politicians and prominent businessmen as meetings were underway for upcoming presidential elections in Jubaland, due in August.

One of the candidates in the election died in the siege, local authorities said.

"The whole building is in ruins, there are dead bodies and wounded who have been recovered from inside. The security forces have cordoned off the whole area," said witness Muna Abdirahman.

Another witness Hussein Muktar said: "The blast was very big." "The security forces are in control now and the last terrorist was shot and killed", security official Mohamed Abdiweli said.

"There are dead bodies and wounded people strewn inside the hotel," Abdiweli added.

He said authorities believed four gunmen, who one witness described as wearing Somali police uniforms, were involved in the attack.

Halayeh's death sparked an outpouring of grief on social media.

She was an ardent campaigner for Somali unity and peace and had started an online TV show named Integration. 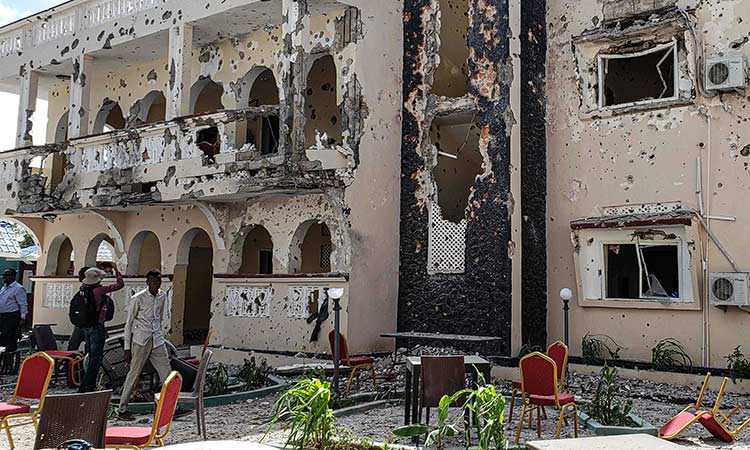 A man passes in front of the rubbles of the popular Medina hotel of Kismayo on Saturday. Stringer / AFP

In a recent podcast, Nalayeh said her television programme about the Somali diaspora gave the community a voice.

"Social media has changed the game for how people learn about culture. So, if we don't become the creators of our own content, we are going to be at the mercy of other people telling the stories of Africa," she had said.

A local journalist, Mohamed Omar Sahal, also died in the siege, the Somali journalists' union SJS said, adding that these were the first journalist deaths in the country this year.

Al Shabaab, the Al Qaeda-linked group, claimed responsibility for the siege describing it as "a martyrdom attack."

The US Mission to Somalia condemned the attack and said it would "continue to work with our Somali and other international partners in the fight against violent extremism."

The African Union's Special Representative in Somalia, Francisco Madeira, said the attack was "meant to derail progress in Somalia as the country rebuilds and consolidates the gains made on peace and security.

"The attackers are a group of people with a criminal, murderous and destructive agenda. They cannot claim to be fighting to bring good governance to the country," he said.