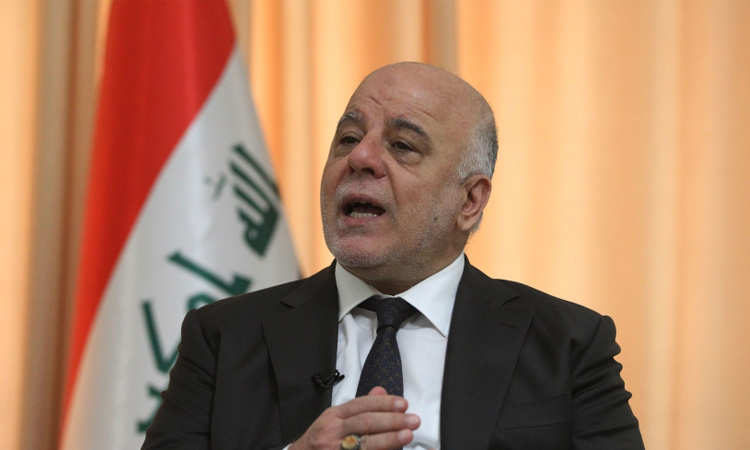 Haider Al Abadi speaks during the interview in Baghdad. AFP

As the government of incumbent Prime Minister Adel Abdel Mahdi faces growing criticism over poor services, Abadi has been working in the wings to secure a second term, according to multiple sources.

"We have good intentions," he said coyly, when asked about his ambitions in a wide-ranging AFP interview at his home in Baghdad's "Green Zone."

The 67-year-old, who came to office in 2014 without an election as Iraq reeled from Daesh group grabbing a third of the country, has sent out feelers to major political blocs who may help him win allies in parliament, a government source said.

"He may take advantage of a wave of summertime protests if they happen," said the source.

Abadi has even reached out to Iraq's powerful Shiite clerics, who can make or break a politician's career, said intermediaries close to the religious establishment.

The rumours of his return have gained so much traction that Abdel Mahdi has repeatedly had to deny allegations he was preparing to resign.

Abadi oversaw both the fight against Daesh group and a tough response by Baghdad to an independence referendum by the country's Kurds, but his bloc fared poorly in national elections last year.

Everything will 'fall apart'

Abadi painted himself as an opposition figure, who could help "guide" the current government.

The chief priority should be tackling corruption, he said, in a country ranked by Transparency International as the world's 12th most corrupt.

"There is a new kind of state corruption now — selling positions, which happened secretly in the past but now goes on in the open," Abadi said. "Everything has a price."

Graft is endemic across Iraq, where parliament estimates that $228 billion has vanished into the pockets of shady politicians and businessmen over the last 15 years.

Abadi himself was accused of failing to curb corruption during his term.

The ex-premier said the government should also tackle the spectre of sectarian violence, which ravaged Iraq's diverse communities over a decade ago.

"In the past, sectarianism was used as a weapon in the conflict between factions to divide up the spoils of war," he said.

"If Daesh or another terrorist group returns, or if a cocktail of terrorists and politicians is formed, it'll be so dangerous that everything will completely fall apart."

Abadi himself declared Daesh defeated in December 2017 after a draining three-year military campaign, a moment that will likely define his legacy.

Several months earlier, he had ordered federal troops to retake disputed territories and adjacent oil fields from Kurdish forces after an independence referendum in the autonomous region that saw an overwhelming vote in favour of secession.

"I have no problems with Kurdish citizens," he said.

"But there is a problem with some of the parties which control the region, its wealth and its oil," Abadi said.

He accused the KRG of exporting nearly double the agreed amount from their northern pipeline without federal authorisation, asking: "Where are the revenues?"