S.Korea steps up efforts for US help in export row with Japan - GulfToday 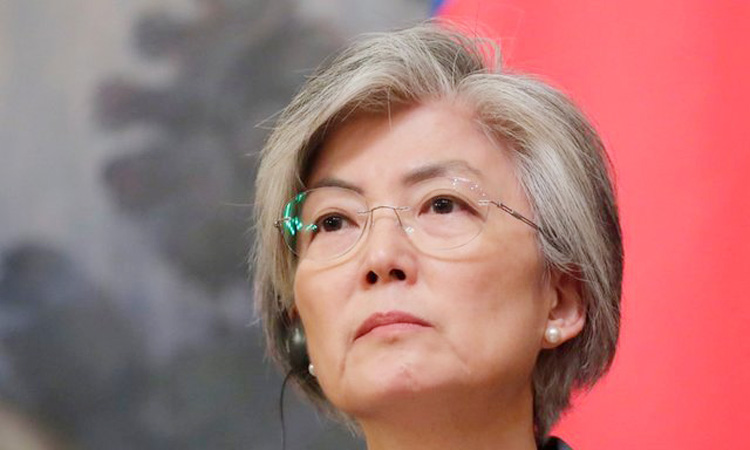 South Korea’s foreign minister told US Secretary of State Mike Pompeo that Japan’s export curbs against Seoul are “undesirable,” the Foreign Ministry said on Thursday, as a trade row between the East Asian neighbours grows.

South Korea’s ruling party also announced on Thursday that up to about 300 billion won ($254.8 million) would be included in a supplementary budget bill to cope with Japan’s export curbs.

Japan tightened curbs last week on exports of three materials crucial for smartphone displays and chips, saying trust with South Korea had been broken in a dispute with Seoul over South Koreans forced to work for Japanese firms during World War Two.

South Korea and Japan clashed at the World Trade Organization (WTO) earlier this week and Seoul is stepping up diplomatic overtures to their mutual ally, the United States, to step in. However, experts said the United States is unlikely to step in as a mediator in the dispute.

South Korean Foreign Minister Kang Kyung-wha told Pompeo in a phone call late on Wednesday that Japan’s trade restrictions may not only cause damage to South Korean companies but could also disrupt the global supply chain and hurt US companies.

Kang “expressed concern that this is undesirable in terms of friendly relations between South Korea and Japan and trilateral cooperation among South Korea, the US and Japan,” the ministry said. Seoul hoped Tokyo would withdraw the curbs and that the situation would not deteriorate further, it said.

Pompeo said he understood and both agreed to continue to cooperate and to strengthen communication between the three sides, the Foreign Ministry said in a statement.

Kim Hyun-chong, deputy chief of South Korea’s National Security Office, arrived in Washington, DC, on Wednesday on an unannounced visit and told reporters he was there to meet officials from the White House and Congress to discuss issues that included Japan’s export curbs.

Former Japanese ambassador to the United States, Ichiro Fujisaki, said in an interview with Reuters on Wednesday that “I don’t think we need the United States to mediate, just like Japan would not mediate US-Mexico ties or US-Canada relations.”

“This is an issue to be solved between Japan and South Korea,” Fujisaki said.

New US Assistant Secretary of State for East Asian and Pacific Affairs David Stilwell is visiting Asia until July 21, including stops in Japan and South Korea, to work on a shared vision for the Indo-Pacific region, the State Department said in a statement.

It did not say whether the Japan-South Korea dispute would be discussed.

Sheila Smith, senior fellow for Japan studies at the Council on Foreign Relations, said it may be too early for Stilwell to assess what the United States could do to help.

“He is likely to begin with what I would call deep listening,” she said.

South Korea’s Democratic Party said in a statement on Thursday it would include up to 300 billion won ($254.8 million) in an extra budget to cope with Japan’s export limits on high-tech materials.

The size of the South Korean government’s 6.7 trillion won supplementary budget plan, proposed in April, can change during its parliamentary review this month, a finance ministry official said.