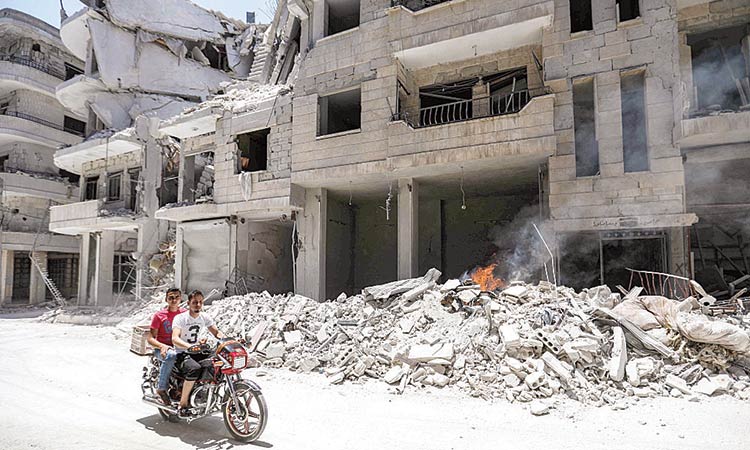 Men ride a motorcycle past debris outside a hospital damaged after a reported air strike in Idlib province on Wednesday. Agence France-Presse

Russian and regime aircraft have ramped up their deadly bombardment of the Idlib region − administered by Syria’s former Al-Qaeda affiliate Hayat Tahrir Al-Sham, and home to some three million people − since late April, despite a months-old international truce deal.

Clashes have also raged on the edges of the region, including in the north of Hama province.

Late Wednesday, HTS and allied rebels took control of Hamameyat village and hilltop, in clashes that killed 41 regime fighters and 30 fighters within the insurgents’ own ranks, the Syrian Observatory for Human Rights said.

“The fighting is ongoing as regime planes and artillery pound the area,” the head of the Britain-based monitor Rami Abdel Rahman said on Thursday morning.

Naji Mustafa, a spokesman for the allied National Liberation Front rebel grouping, said: “The hill is very strategic because it overlooks... supply routes to enemy forces.”

Russian air strikes killed one civilian in the town of Latmaneh and rebel artillery fire took the life of one woman in the regime-held area of Karnaz, the Observatory said.

A September deal between Russia and rebel backer Turkey was supposed to avert a massive regime offensive on Idlib, but it was never fully implemented and HTS took full administrative control in January.

More than 560 civilians have been killed in regime and Russian air strikes on northwest Syria since the end of April, according to the Observatory.

Rebel fire during the same period has killed more than 40 civilians in adjacent government-held areas, it has said.

The United Nations says 25 health facilities in the region have been hit, while the fighting has forced 330,000 people to flee their homes.

Syria’s war has killed more than 370,000 people and displaced millions since it started in 2011 with a brutal crackdown on anti-government protests.