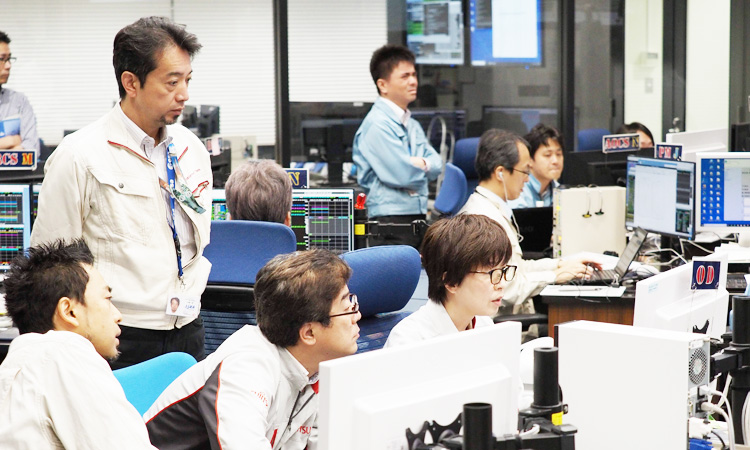 Researchers and employees working at a control room for the Hayabusa2 mission in Sagamihara city, Kanagawa prefecture. Japan/ AFP

Japan’s Hayabusa2 probe began descending on Wednesday for its final touchdown on a distant asteroid, hoping to collect samples that could shed light on the evolution of the solar system.

“At 9:58, we made a ‘Go’ decision for the Hayabusa2 probe’s second touchdown,” the Japan Aerospace Exploration Agency (JAXA) said in a statement.

“Currently the probe is working normally.”

The probe is expected to touch down on Thursday on the Ryugu asteroid, some 300 million kilometres (185 million miles) from Earth.

If successful, it will be the second time it has landed on the desolate asteroid as part of a complex mission that has also involved sending rovers and robots down onto it.

The mission hopes to collect pristine materials from beneath the surface of the asteroid that could provide insights into what the solar system was like at its birth, some 4.6 billion years ago.

To get at those crucial materials, in April an “impactor” was fired from Hayabusa2 towards Ryugu in a risky process that created a crater on the asteroid’s surface and stirred up material that had not previously been exposed to the atmosphere.

“This is the second touchdown, but doing a touchdown is a challenge whether it’s the first or the second,” Yuichi Tsuda, Hayabusa2 project manager, told reporters ahead of the mission.

“The whole team will do our best so that we’ll be able to complete the operation,” he said.

Hayabusa2’s first touchdown was in February, when it landed briefly on Ryugu and fired a bullet into the surface to puff up dust for collection, before blasting back to its holding position.

The second touchdown requires special preparations because any problems could mean the probe loses the precious materials already gathered during its first landing.

A photo of the crater taken by Hayabusa2’s camera shows that parts of the asteroid’s surface are covered with materials that are “obviously different” from the rest of the surface, mission manager Makoto Yoshikawa told reporters.

The probe is expected to make a brief touchdown on an area some 20 metres away from the centre of the crater to collect the unidentified materials believed to be “ejecta” from the blast.

“It would be safe to say that extremely attractive materials are near the crater,” Tsuda said.

The touchdown will be the last major part of Hayabusa2’s mission, and when the probe returns to Earth next year scientists hope to learn more about the history of the solar system and even the origin of life from its samples.

At about the size of a large refrigerator and equipped with solar panels to keep it powered, Hayabusa2 is the successor to JAXA’s first asteroid explorer, Hayabusa — Japanese for falcon.

That probe returned with dust samples from a smaller, potato-shaped asteroid in 2010, despite various setbacks during its epic seven-year odyssey and was hailed as a scientific triumph.

Hayabusa2 observes the surface of Ryugu with its camera and sensing equipment but has also dispatched two tiny MINERVA-II rover robots as well as the French-German robot MASCOT to help surface observation.

Its photos of Ryugu, which means “Dragon Palace” in Japanese and refers to a castle at the bottom of the ocean in an ancient Japanese tale, show the asteroid has a rough surface full of boulders.

Launched in December 2014, the Hayabusa2 mission has a price tag of around 30 billion yen ($270 million) and is scheduled to return to Earth with its samples in 2020.

But its mission has already made history, including with the creation of the crater on Ryugu’s surface.

In 2005, NASA’s Deep Impact project succeeded in creating an artificial crater on a comet but only for observation purposes. 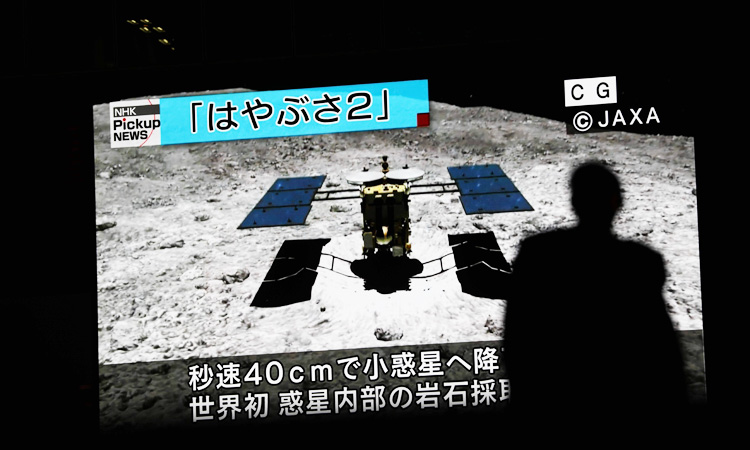 Japan’s Hayabusa2 probe landed successfully on Thursday on a distant asteroid for a final touchdown, hoping to collect samples that could shed light on the evolution of the solar system.