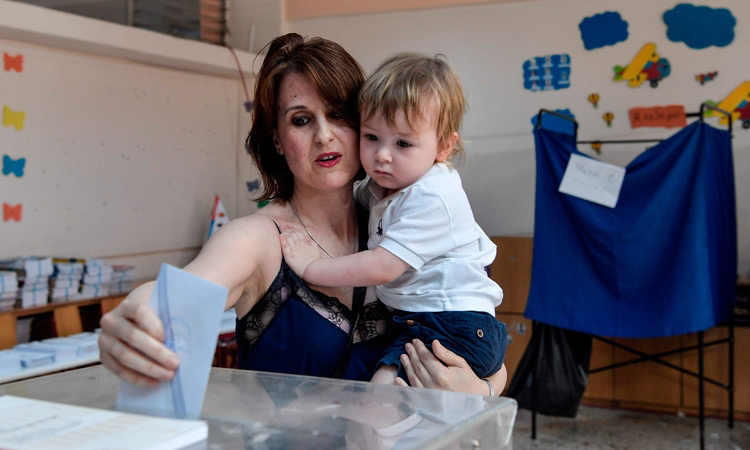 Greek voters cast their ballots on Sunday in the country's first national election of the post-bailout era, with leftist Prime Minister Alexis Tsipras's Syriza party expected to be ousted by the conservative opposition.

After nearly five years in power, Greece's longest-serving crisis premier -- as well as the youngest in more than a century -- is battling to overcome a 10-point deficit in opinion polls amid widespread dissatisfaction after years of high taxation.

"Today is a big celebration of democracy. Greek women and men hold the fate of this land in their hands.

Exit polls are expected soon after polls close and the first results should come in around 09pm.

With three new opinion polls predicting a clear victory for the conservative New Democracy party, Tsipras called for supporters to mobilise, hoping for a turn around.

"Today we are fighting this battle from the first to the last minute. With optimism and determination. The ballots are empty and all possibilities are open," he tweeted on Sunday.

A woman (right) cast her ballot at a polling station in Athens, on Sunday.

A man picks up ballot forms prior to voting at a polling station in Thessaloniki on Sunday. Sakis Mitrolidis/AFP

A woman casts her ballot at a polling station during the general elections in Thessaloniki on Sunday. Sakis Mitrolidis/AFP

People check the voting lists outside a polling station in Thessaloniki on Sunday. Sakis Mitrolidis/AFP

After voting in Kypseli, near the centre of Athens, with his supporters cheering, the premier called on young people "not to leave this crucial decision for their lives in the hands of others".

Opinion polls have consistently forecast that New Democracy headed by Kyriakos Mitsotakis, a former banker and scion of a leading Greek political family, will win an absolute majority in Sunday's legislative elections.

"Today is a big celebration of democracy. Greek women and men hold the fate of this land in their hands," Mitsotakis said after voting in an Athens suburb.

Some members of a small far-left party protested outside the polling station were Mitsotakis voted, but their shouts were drowned out by New Democracy supporters calling their leader the new prime minister.