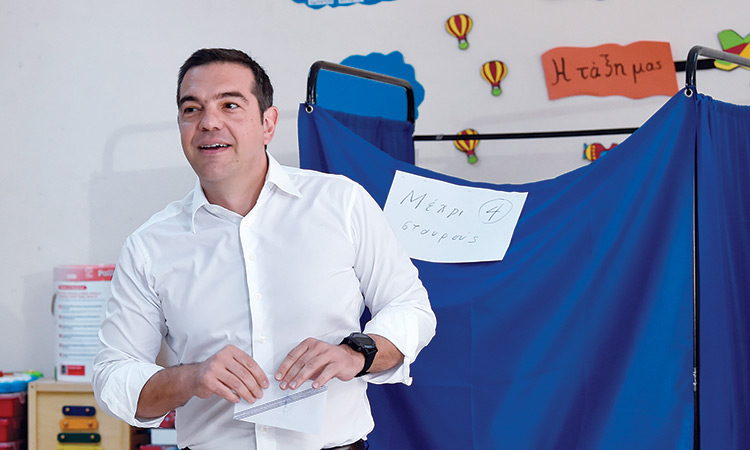 Alexis Tsipras at a polling booth prior to casting his ballot in Athens. Agence France-Presse

Greece’s opposition conservatives were on track to return to power by a landslide on Sunday, exit polls suggested, unseating incumbent leftists blamed for pushing the crisis-hit country further into debt.

Two exit polls gave conservative New Democracy a commanding led of between 38 and 42 per cent of the vote, suggesting an outright majority in Greece’s parliament.

One of the exit polls showed New Democracy, lead by opposition leader Kyriakos Mitsotakis, winning between 155 and 167 seats in the 300 member parliament. If verified, it would be the widest margin of victory for a Greek party since 1981.

“Greece has signalled to Europe that it is time to put populism behind us,” said Anna Michelle Asimakopoulou, a senior lawmaker with New Democracy.

One official of ruling Syriza, Panos Skourletis, appeared to concede defeat, saying the gap shown in the exit polls was unlikely to be overturned.

“We have a clear victory for New Democracy. We will wait to see how they will utilize it,” Panos Skourletis told state TV.

Sunday’s poll was the first national election since the country shook off close scrutiny by its European partners who loaned Greece billions in three bailouts.

Incumbent Prime Minister Alexis Tsipras signed up to the latest, in 2015, in return for potential debt relief.

“The basic reason (for the result) is the economy,” said analyst Theodore Couloumbis. “In the past 4.5 years people saw no improvement, on the contrary there were cutbacks in salaries and pensions,” he said.

The snap election was called after Syriza suffered a defeat in European elections in May.

Greece endured a debilitating financial crisis from 2010 that required three cash lifelines from its eurozone partners.

“I want the government that will be elected to do its best for the people, who are hungry,” said pensioner Christos Mpekos, 69. “To give jobs to the young so they don’t leave.” Tsipras says that a vote cast for Mitsotakis would go to the political establishment, which forced Greece to the edge of the precipice in the first place.

But he has also been roundly criticised for mismanagement of crises and for brokering a deeply unpopular deal to end a dispute over the name of neighouring North Macedonia.

Greece wrapped up its last economic adjustment programme in 2018 but remains under surveillance from lenders to ensure no future fiscal slippage. While economic growth has returned, Greek unemployment of 18 per cent is the euro zone’s highest.

New Democracy has promised to invest in creating well-paid jobs with decent benefits. It has also promised to be tough on crime in some neighbourhoods of Athens where there is a strong anarchist movement.

In one neighbourhood, activists stormed a polling station and made off with a ballot box.

Currently polling in third place, the 54-year-old Gennimata is leader of the Movement for Change, a rebranded Pan-Hellenic Socialist Movement, or Pasok, the party that dominated the government for three decades but was devastated by the financial crisis a decade ago and has lost the bulk of its support to Prime Minister Tsipras’ Syriza party.

An effort two years ago by Gennimata to expand the party, joining forces with other centrist groups, was tarnished by multiple policy and administrative disputes within the revamped party. Gennimata has overtaken the extreme right Golden Dawn Party for third place in opinion polls before Sunday’s election.

The former director of a Communist newspaper, Dimitris Koutsoumbas, 63, is the General Secretary of the Communist Party of Greece, KKE, a party that maintained unwavering support for the Soviet Union’s leadership over decades while other Communist parties in Europe distanced themselves from Moscow.

Koutsoumbas has defended party political traditions and orthodoxy, focusing attacks on its one-time ally Syriza, accusing it of selling out workers’ rights. The KKE’s leadership failed to win over any significant boost in public support for the party during the financial crisis and has seen its share of the vote dip over the last 20 years.

Three other parties are vying for seats in parliament - set by a threshold of 3% of the vote nationwide.