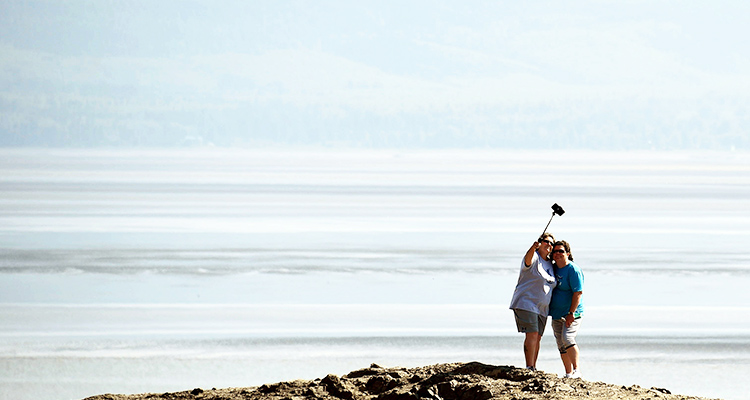 Two women take a selfie on a rock outpost at Beluga Point south of Anchorage, Alaska.

Anchorage, Alaska's largest city, recorded a 90 degrees Fahrenheit (32 centigrade) as heat takes over the US state.

The fireworks scheduled for the Fourth of July were canceled due to risk of wildfires caused by "extreme dry weather conditions," as temperatures matching those in Miami highlighted rapid warming in a region considered particularly vulnerable to climate change.

"At 5pm this afternoon, Anchorage International Airport officially hit 90 degrees for the first time on record.

The average high temperature for July 4 in Anchorage, located in southern Alaska, is a far cooler 65 degrees.

The abnormally warm weather is being caused by a "giant ridge of high pressure sitting right over us," NWS meteorologist Bill Ludwig told the Anchorage Daily News.

Alaska is bracing for record warm temperatures and dry conditions in parts of the state.

Sam Lightle and Brandon York take in the scenery along a creek below the Byron Glacier.

The abnormally warm weather is being caused by a giant ridge of high pressure.

Alaska had earlier broken temperature records throughout a hot spring, particularly in the Arctic zone which is especially sensitive to fluctuations in climate.

All 30 days in June had above-average temperatures, the NWS said.

According to scientists, Alaska is warming at twice the rate of the global average.

The dramatic warming Alaska has experienced in recent years -- linked partly to a decline in sea ice and Arctic ocean warming -- has wreaked havoc on local communities, wildlife and the state's economy. 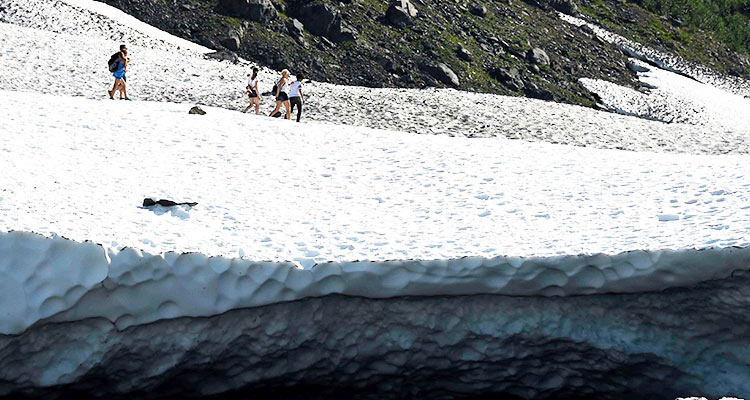 People hike on the Byron Glacier.

Permafrost -- the frozen ground that covers almost 85 percent of Alaska -- is thawing, affecting everything from building foundations to wildlife habitats and the picking of berries that grow on the tundra.

Frozen rivers usually serve as transport routes in winter, as two-thirds of communities in the state are not accessible by road.

Many recreational sled-dog races have had to be canceled this year, and the famed Iditarod race had to be re-routed as what is normally solid sea ice was open water on part of the race course.

Alaska's seal population is likely to be affected this summer, as some species give birth on solid ice, Thoman said.