Minister from Canada criticised for sharing photo with Malala - GulfToday

Minister from Canada criticised for sharing photo with Malala 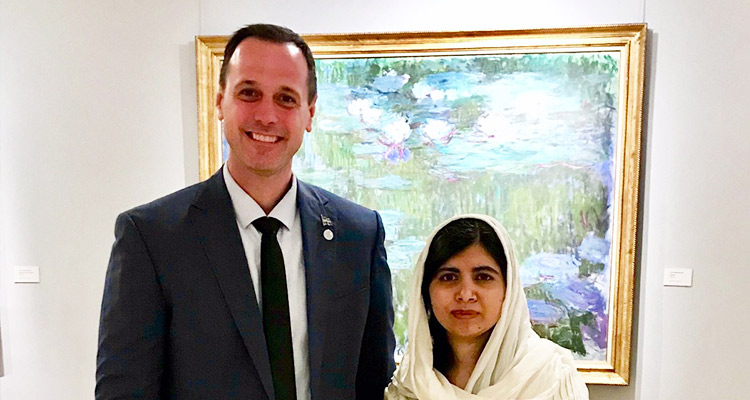 Roberge and Malala pose for a photograph in France.

Canadian Minister, Jean-Francois Roberge is accused of being a hypocrite after he took to social media to share a picture with Malala Yousafzai.

It came less than two weeks after his Coalition Avenir Quebec (CAQ) government adopted a law that bans public sector employees in positions of authority, including teachers, police officers and judges, from wearing religious symbols at work.

Numerous responses on Roberge's Friday Twitter post pointed out that Yousafzai - who opposed the Taliban's efforts to ban schooling for girls in her native Pakistan - wouldn't be legally permitted to teach in Quebec schools while wearing a headscarf under his government's "Bill 21".

"Did you tell her that in Quebec, women dressed like Malala do not have access to certain jobs in the public service? Thanks to your government," one Twitter user said.

"You hypocrite. You wouldn't let her become a teacher here in Quebec - you can't score points by posing with Malala," said another.

When asked by a journalist how he would respond if Yousafzai wanted to become a teacher in Quebec, Roberge was quick to defend his government's policies.

"I would certainly tell her it would be an immense honour and that in Quebec, as in France ... as well as in other open and tolerant countries, teachers can't wear religious signs while performing their duties," he responded.

While the CAQ government maintains its religious symbols ban has widespread support from Quebecers, it has also sparked legal challenges and protests in Montreal. Some schools even vowed not to apply the law.

Quebec's opposition parties also criticized Roberge after the photo was posted. Liberal MNA Christine St-Pierre said it was unbelievable and asked if Roberge spoke to Yousafzai about "Bill 21".

The Pakistani-born Yousafzai, 21, won the Nobel Peace Prize in 2014 for her work in supporting the right of young girls to get an education. When she was 15, a Taliban gunman shot her and two other girls in an assassination attempt as a response to her activism.