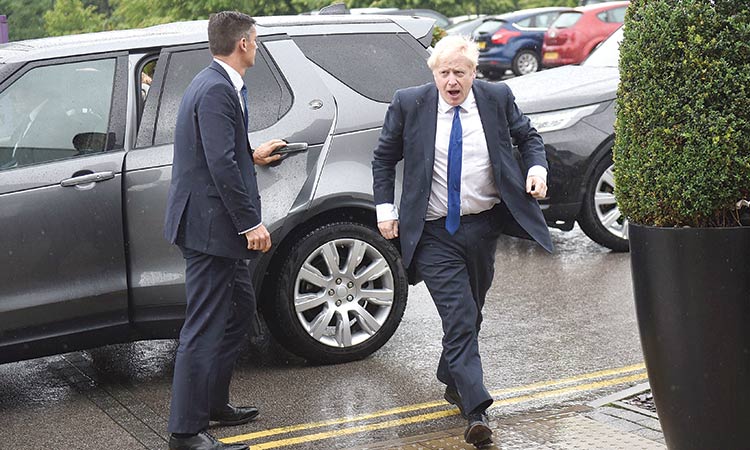 Ballot papers have been sent to about 160,000 Conservative Party members in the UK, asking them to choose between Boris Johnson, a former London mayor and foreign minister, and Jeremy Hunt, the current foreign minister, as their next leader and prime minister.

The vote is due to close on July 22, with the victor announced a day later.

The BBC said it has learned that some members have received two ballot papers, citing one party insider as estimating that more than a thousand members could be affected.

It said that in some cases this was because members live and work in different constituencies and may have joined the local Conservative associations in both areas. Other members may have changed their name after marriage.

The Conservative Party could not be contacted for immediate comment on Saturday.

The BBC cited the party as saying the ballot has clear instructions that members voting more than once will be expelled.

“It’s made very clear on the ballot paper that you’re only allowed to vote once and I expect Conservative members to follow that,” Conservative Party lawmaker Patrick McLoughlin, a former chairman of the party who is chairing Hunt’s leadership campaign, told BBC radio on Saturday.

The two finalists in the race to succeed Theresa May as Britain’s prime minister wooed voters on Friday in Scotland, where frontrunner Johnson’s “no-deal Brexit” threats are fanning the flames of independence.

Scotland has been traditional tricky terrain for Britain’s governing Conservative Party, which has not topped a UK general election there since the 1950s.

Johnson and Hunt held a hustings meeting in Perth, a city in central Scotland — the latest leg of a month-long contest that will conclude with one of them being appointed Britain’s next prime minister on July 24.

It was Johnson’s first trip north of the English border during the campaign.

Stealing a march on Johnson, Hunt visited Scotland last month and has secured the endorsement of the Scottish Conservatives’ leader Ruth Davidson, who is wary of the prospects of Britain splitting away from the EU without any plans for what happens next.

Perhaps more charismatic but less pragmatic than Hunt, bookmakers reckon Johnson appears to be cruising to victory among the 160,000 grassroots Conservatives who will pick the governing party’s next leader by postal ballot.

However, Scotland, especially wary of the effects Brexit may have, may be one part of the UK that has not fallen under his spell.

“Boris is a big character. He is very popular in England; he is a bit of an unknown quantity in Scotland,” said Craig Hoy, 44, a councillor in East Lothian, east of Edinburgh.

“He would have a big job in the coming weeks, and if he is elected as a prime minister, to make sure that he acts in Scotland interests.”

Though Conservatives have started receiving their ballot papers in the post, Max Mitchell, 27, a local councillor in the Scottish capital, is yet to make up his mind.

For him, the key priority is “devotion to the union”: keeping Scotland in the United Kingdom.

Theresa May has also urged her successor as leader of the Conservative and Unionist Party — to give it its full title — to do everything to preserve the union, with nationalists eyeing Brexit as an opportunity to push the independence case again.

In a speech in the Scottish city of Stirling on Thursday, she stressed the importance of concluding a good divorce deal with the European Union.

Scotland voted 55 percent in favour or remaining in the UK in a 2014 referendum.

However, that was before the 2016 referendum on Britain’s membership of the EU, in which 62 per cent within Scotland backed the UK remaining in the bloc.

Scottish First Minister Nicola Sturgeon, who leads the left-wing secessionist Scottish National Party, wants another independence referendum by 2021 if Britain goes through with leaving the EU — scheduled for October 31 this year.

The pro-EU sentiment remains strong, with one poll showing 53 per cent of respondents saying they would vote in favour of Scottish secession were Johnson to become Britain’s premier.