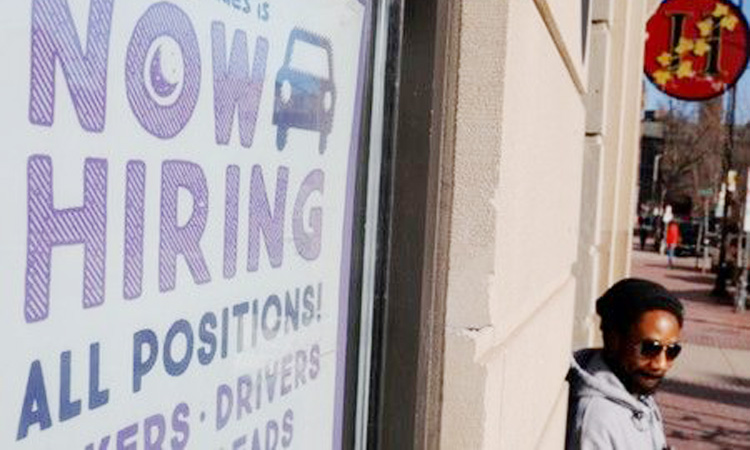 A “Now Hiring” sign sits in the window of Insomnia Cookies in Cambridge, Massachusetts, US. File photo/Reuters

US job growth likely rebounded in June, with wage gains expected to pick up, but that would probably not be enough to discourage the Federal Reserve from cutting interest rates this month amid growing evidence the economy is slowing.

Lack of concrete progress in resolving an acrimonious trade war between the United States and China was also seen forcing the US central bank’s hand, regardless of a strong employment report from the Labor Department on Friday. The Fed last month signaled it could ease monetary policy as early as July, citing low inflation as well as growing risks to the economy from an escalation in trade tensions between Washington and Beijing.

President Donald Trump and Chinese President Xi Jinping last week agreed to a trade truce and a return to talks. White House trade adviser Peter Navarro said on Tuesday talks were heading in the right direction, but it would take time to get the right deal made. The trade fight has undercut business confidence, leading to a downturn in equipment spending and manufacturing.

“Given signs of slowing growth and little material progress on the trade war, a rebound in job growth would still leave the Fed on course to cut rates at the July meeting and we expect a 25 basis points cut,” said Sam Bullard, a senior economist at Wells Fargo Securities in Charlotte, North Carolina.

Nonfarm payrolls probably increased by 160,000 jobs last month after rising by only 75,000 in May, according to a Reuters survey of economists. May marked the second time this year that job gains dropped below 100,000.

Job growth has slowed to an average of 164,000 per month this year from 223,000 in 2018. The pace, however, remains well above the roughly 100,000 needed to keep up with growth in the working age population. In light of May’s moderation in hiring Fed Chairman Jerome Powell has said job growth “bears watching.”

While the economy is celebrating 10 years of expansion, the longest in history, and its fundamentals remain healthy, there are signs that momentum is slowing as the stimulus from last year’s massive tax cuts and more government spending fizzles.

Consumer spending is rising moderately, with confidence easing from its recent lofty levels. Manufacturing and the housing market are struggling and the trade deficit is widening again. Construction spending has weakened as the boost from increased investment in roads and highways by state and local governments fades.

Though wage growth is expected to have picked up in June, the trend has slowed from late last year when wages were rising at their fastest rate in a decade. Average hourly earnings are forecast increasing 0.3% after gaining 0.2% in May. That would lift the annual increase in wages to 3.2% from 3.1% in May, which was the slowest rise in eight months.

“I am skeptical that consumers can keep the slowdown, which is centered in manufacturing and business investment, from seeping into other corners of the economy,” said Scott Anderson, chief economist at the Bank of the West in San Francisco.

The Atlanta Fed is forecasting gross domestic product rising at a 1.3% annualized rate in the second quarter. The economy grew at a 3.1% pace in the first quarter.

The unemployment rate is expected to have remained near a 50-year low of 3.6% in June for a third straight month. But the jobless rate could surprise on the upside as a survey last week showed consumers less upbeat in their perceptions of the labor market this month.

The Conference Board survey’s so-called labor market differential, derived from data about respondents who think jobs are hard to get and those who think jobs are plentiful, fell to a one-year low in June. This measure closely correlates to the unemployment rate. Some of the recent drop in the jobless rate has been because of people leaving the labor market.

Job growth has slowed in part as employers struggle to find qualified workers. There are about 7.4 million job openings.

“Business investment has been weak in part due to increased uncertainty over the global environment and trade,” said Michelle Girard, US chief economist at NatWest Markets in Stamford, Connecticut. “This wait-and-see attitude could lead to a slowdown in the pace of hiring in the months ahead as well.”

Hiring likely picked up in most sectors in June, though manufacturing payrolls were probably unchanged after rising by 3,000 in May. The sector is struggling with an inventory bulge, concentrated in the automotive industry, trade tensions, design troubles at planemaker Boeing and slowing global growth.

Government employment is forecast rebounding after shedding 15,000 jobs in May, the most in 16 months. Hiring for the 2020 Census is a wild card to the estimate.

The average workweek is expected to have been unchanged at 34.4 hours in June for a third straight month.