Spend quality time with kids at theme parks this summer 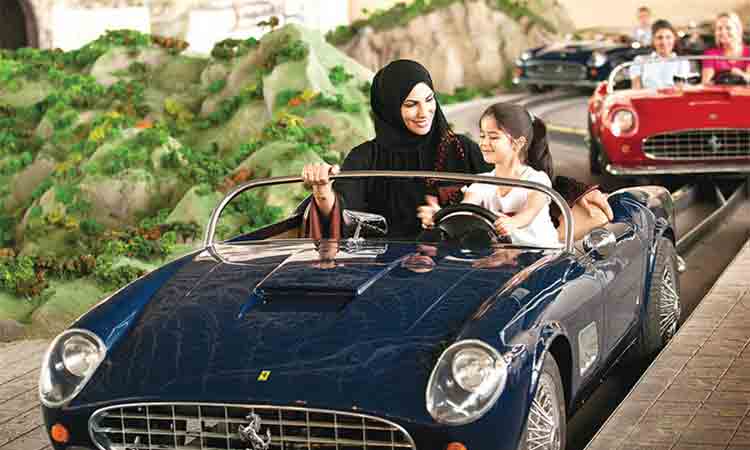 A mother and a daughter enjoy an amusement ride at a park in Abu Dhabi.

With the holiday season looming and back to fun, frolicking and games, how do you think some capital children are going to cope spending their off school summer season?

Children as is the norm, spend their entire school days, waiting for merry holiday seasons to get together with friends and enjoy some time out.

‘Gulf Today’ met a few families to know how they intend to keep their children out of boredom during the summer vacation. Despite their heavy working schedules some expatriate families who are staying back in the capital desire to take their children to indoor stations like the malls, theaters, theme parks including sending them to summer camps.

A few who visited theme parks had this to say, “The indoor parks with their thrilling rides and many other fun activities will be a lovely day out for the kids along with their families.”

As you step into Warner Bros.World Abu Dhabi, it transports you to an incredibly immersive world filled with all your favorite characters.

Fit for the young and the young at heart, family, friends and little ones can embark on an amazing journey through six lands, starting with the Warner Bros. Plaza which celebrates the golden age of Hollywood. The bold and brave can help The Dark Knight fight crime in Gotham City or save the cosmos with The Green Lantern in Metropolis.

Guests can enjoy the whimsical world of Cartoon Junction as you meet and greet the likes of Bugs Bunny, Daffy Duck, Tom and Jerry and none other than Scooby and the Gang.

Moreover for satisfying your appetite, one of the world’s largest theme parks is fully equipped with over twenty two distinctive dining experiences featuring mouthwatering cuisines from around the world. Then there are souvenirs one can take from the park.

Warner Bros. World Abu Dhabi is an indoor amusement park in Abu Dhabi.The park features characters from Warner Bros’s franchises, such as Looney Tunes, DC Comics, Hanna-Barbera, and others. The park is located on Yas Island near Ferrari World and Yas Waterpark, and is the third Warner Bros.’s theme park.

Inspired by the UAE’s rich heritage of pearl diving through its unique story of ‘The Legend of the Lost Pearl’, Yas Waterworld Abu Dhabi is the world’s leading water park and the UAE’s first mega water park. With over 40 rides, slides and attractions for the whole family, this water park is guaranteed to create a splash-filled adventure, suitable for all ages! Take a plunge from a mountaintop, slide inside a giant snake, shoot cannons out of a rollercoaster or rule a gigantic fortress, all at the world’s leading water park.

While busy having a splash-tastic time, little ones can float down a lazy waterway at Al Raha River, or stay happily active in the Tot’s Playground.

Visitors at Yas Waterworld can experience the world’s first and largest hydro-magnetic-powered, six-person tornado waterslide that extends up to 235 meters in length. For adrenaline junkies, there are three-meter-high waves on Bubble’s Barrel, which has the world’s largest surf sheet wave for flow-boards and body-boards. The Bandit Bomber, a 550– meter coaster, is the first with onboard water and laser effects. Riders can shoot jets of water at targets, drop water bombs and trigger special effects, while people below can spray them with water as they pass.

Moreover there is adventure at Ferrari World Abu Dhabi. Iconic in its own right, the world’s first Ferrari-branded park has a host of thrilling Ferrari-themed rides and attractions that are sure to get your heart racing!

From state-of-the-art simulators and record breaking rides to immersive and interactive child-friendly attractions like the Junior Training Camp, this is a perfect day out for the whole family. The parks are the perfect trio for families and friends looking for the ultimate day out. Guaranteed to get you to any attraction on the island within minutes, guests can hop on the Yas Express to make their way around Yas Island’s theme parks for a truly unforgettable summer.