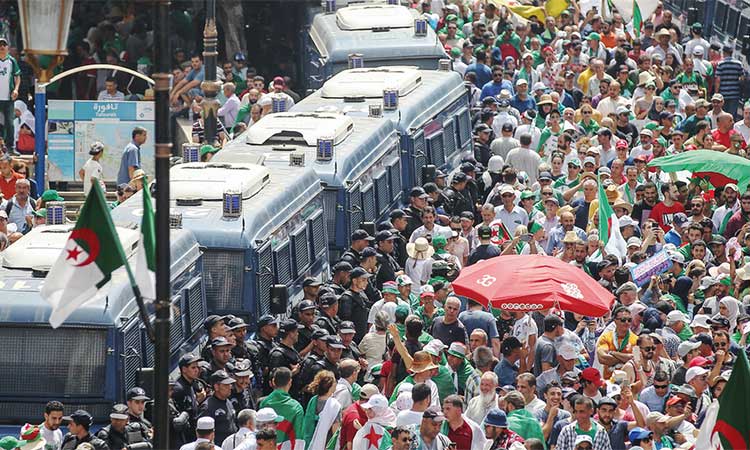 Algerian protesters gather during a weekly demonstration in the capital Algiers on Friday. Agence France-Presse

The massive protest, which coincided with Algeria’s Independence Day, was the 20th consecutive Friday crowds had gathered to demand a break with the elite which has dominated the oil and gas producer for decades.

Numerous banners held up by protesters referred to an article of the constitution which says the people are the sovereign, while some others read: “We want a free and democratic state” and “We don’t want a military state but a civilian state”.

Algeria’s army, the country’s most powerful institution, has managed the transition from Bouteflika but wants to overcome the deadlock rapidly through a presidential election, observers say.

A vote had been initially planned for this week but was postponed by the authorities.

The army fears instability in neighbouring Libya and the Sahel region will encourage armed groups to operate in Algeria to exploit the transition.

Algeria is an important gas supplier for Europe and a key US partner in the fight against militants in the region.

“The system is corrupt, fully corrupt. So we demand the removal of all those who were with Bouteflika’s system,” said 23-year old Slimani Hached who works at a state firm in Algiers.

Protesters again called for the removal of Interim President Abdelkader Bensalah and Prime Minister Nouredine Bedoui, who are both seen as close allies of Bouteflika.

Amid extra-high security and resurgent anger at authorities, crowds wearing Algerian flags on their shoulders, heads and waists poured into the capital Algiers for Friday’s pro-democracy protest on the country’s national holiday to mark Algeria’s 1962 independence.

Protesters were also venting their indignation at the arrests last week of several activists brandishing Berber emblems and of Lakhdar Bouregaa, a veteran of Algeria’s independence war.

Authorities accused the activists of threatening Algeria’s unity by celebrating Berber identity. They also say the 82-year-old veteran is damaging the army’s morale by criticising the powerful military chief.

“What shame a man who liberated the country spends the 57th year anniversary of independence in prison” read one banner. Calls to free Bouregaa rang out at protest marches in other cities where citizens marched.

In Algiers, the capital, authorities deployed an unusually large number of police, who confiscated Berber flags from protesters entering the city. Police surrounded the plaza at the central post office that has been a nucleus of the revolt.

Protesters hope Friday’s demonstration breathes new life into the movement, which is divided over how to achieve lasting change.

“Yes to a civilian state! No to a military dictatorship” read one sign; another read “No dialogue with traitors,” in reference to an appeal this week by interim President Abdelkader Bensalah for dialogue ahead of presidential elections. He has proposed to create a new “entity” to arrange the elections, and promised that both the government and military would not take part.

Powerful army chief, Ahmed Gaid Salah, is another target of protesters. After helping to push Bouteflika from office, he has made numerous calls for quick presidential elections and backed a major anti-corruption sweep that has put generals and industrialists in jail. However, many fear his high-profile role since the start of the revolt augurs the return to center-stage of a military-style regime, like the one that led Algeria through much of its independence.

Friday’s protest comes a day before a conference planned by opposition parties and representatives of the civilian sector to come up with a plan for a transition period.

Amid shouts of “Long live Algeria! Our claims are legitimate!”, hundreds of the protesters successfully forced their way through a police cordon and headed for the esplanade of the main post office, a symbol of the protest movement.

Other chants glorified the martyrs of Algeria’s war of independence, on what is the country’s 57th anniversary of liberation from French rule.

Around a dozen protesters were arrested, witnesses said.