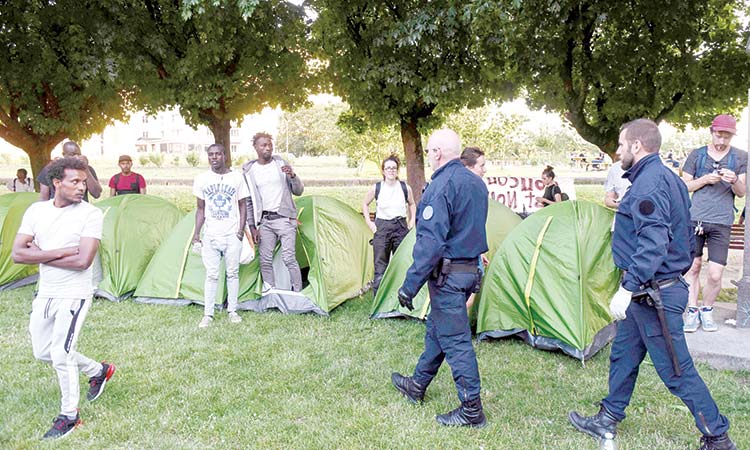 French police arrive to ask migrants to fold their tents at the Daviais square in Nantes on Thursday. Agence France-Presse

Of the 600 migrants that were in the centre, “300 were still there” on  Thursday and receiving humanitarian assistance from the IOM, Safa Msehli, the communications director for the organisation in Libya, said.

Msehli was unable to confirm reports that dozens of migrants had fled on Tuesday night after the raid in the Tripoli suburb of Tajoura which also left 130 wounded.

But the IOM said in a statement that its teams had “located” and transferred to hospital “a group of injured migrants who left Tajoura after the attack in the surrounding neighbourhood.”

“Innocent lives were lost in the attack on Tuesday night, and immediate action is needed from all sides,” the IOM’s Libya chief of mission, Othman Belbeisi, said in the statement.

“The suffering of migrants in Libya has become intolerable. It must be clear to all that Libya is not a safe port and that thousands of lives remain at imminent risk,” he added.

The tragedy provoked an international outcry, but the divided UN Security Council failed to unanimously condemn the attack in an emergency meeting on Wednesday after the United States did not endorse a proposed statement.

According to the IOM, of the more than 600 migrants detained in Tajoura, 187 were registered with its “Humanitarian Voluntary Return” programme which helps migrants go back to their home countries.

The IOM “continues to call for an end to the arbitrary detention and reminds all parties that civilians are not a target,” the IOM statement added, reiterating that some 3,300 migrants are still detained in and around the Libyan capital in centres “considered at-risk.”

The UN Office for the Coordination of Humanitarian Aid said on Thursday that it received reports of guards firing on the migrants as they tried to flee after the airstrikes.

A migrant said it was not clear if the guards fired at the migrants or in the air.

Despite the international outrage following the airstrike, aid groups said there are no plans to evacuate the migrants and that nowhere in Tripoli is safe.

“We are not aware of plans to relocate the migrants that remain in Tajoura,” said Safa Mshli, a IOM  spokeswoman. “Migrants intercepted or rescued at sea should not be returned to Libya, where they will face the same inhumane conditions.”

Migrants who survived the deadly airstrike said they had been conscripted by a local militia to work in an adjacent weapons workshop.

Two migrants said that for months they were sent day and night to the workshop inside the detention center.

“We clean the anti-aircraft guns. I saw a large amount of rockets and missiles too,” said a young migrant who has been held at Tajoura for nearly two years.

Another migrant recounted a nearly two-year odyssey in which he fled war in his native country and was passed from one trafficker to another until he reached the Libyan coast. He boarded a boat that was intercepted by the coast guard, which later transferred him to Tajoura, where he was wounded in Wednesday’s airstrike.

“I fled from the war to come to this hell of Libya,” he said. “My days are dark.”

The migrants requested that their names and nationalities not be published, fearing reprisal.

Many of those who died in the attack were crushed under debris as they slept.

Pictures shared by the migrants show the hangar reduced to a pile of rubble littered with body parts. More than 48 hours after the strike, relief workers were still pulling bodies from the rubble while the wounded lay on bloody mattresses in a courtyard, receiving medical aid.

The UN and aid groups have meanwhile blamed the tragedy in part on the European Union’s policy of partnering with Libyan militias to prevent migrants from crossing the Mediterranean Sea to seek a better life in Europe.

UN agencies and humanitarian organisations repeat regularly their opposition to the return of migrants arrested at sea to the North African country that has been wracked by chaos since the 2011 uprising against longtime ruler Muammar Qadhafi. 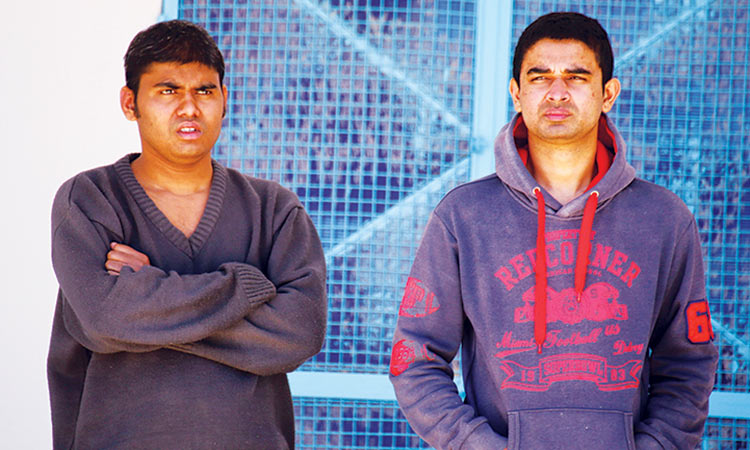 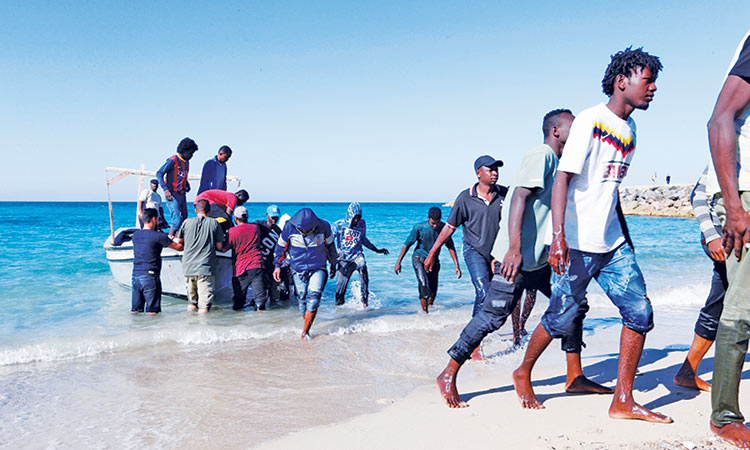