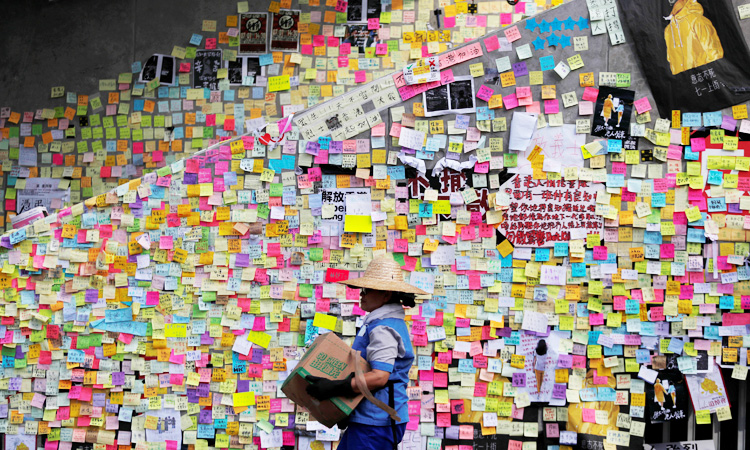 A worker walks past post-it notes scribbled with messages left behind by protesters on the walls of the Legislative Council in Hong Kong, China on Tuesday. Jorge Silva/ Reuters

A tense calm descended on Hong Kong early on Tuesday, hours after police fired tear gas to disperse hundreds of protesters who had stormed the legislature in chaotic scenes to protest against an extradition bill in a direct challenge to Beijing.

Debris including umbrellas, hard hats and water bottles were the few signs left of the mayhem that had engulfed parts of the Chinese-ruled city overnight after protesters stormed and ransacked the legislature.

Police cleared roads near the heart of the financial centre, paving the way for business to return to normal following extraordinary violence on the anniversary of Hong Kong’s 1997 return to Chinese rule.

However, the former British colony’s government offices, where protesters smashed computers and spray-painted “anti-extradition” and slurs against the police and government on chamber walls, were closed on Tuesday.

The government’s executive council meeting was due to be held in Government House, officials said.

Millions of people have taken to the streets in the past few weeks to protest against the now-suspended extradition bill that would allow people to be sent to mainland China to face trial in courts controlled by the Communist Party.

Lawyers and rights groups say China’s justice system is marked by torture, forced confessions and arbitrary detention. China has been angered by Western criticism of the bill.

The bill triggered a backlash against Hong Kong leader Carrie Lam, taking in the business, diplomatic and legal communities that fear corrosion of the legal autonomy of Hong Kong and the difficulty of guaranteeing a fair trial in China.

Lam, Hong Kong’s self-styled Iron Lady, has created a fresh crisis for Chinese President Xi Jinping, who is already grappling with a trade war with Washington, a faltering economy and tensions in the South China Sea.

Hong Kong returned to China under a “one country, two systems” formula that allows freedoms not enjoyed in mainland China, including freedom to protest and an independent judiciary.

However, many fear Beijing’s tightening grip over the city.

Beijing denies interfering but, for many Hong Kong residents, the extradition bill is the latest step in a relentless march towards mainland control.

The self-ruled island of Taiwan, which is overwhelmingly opposed to a “one country, two systems” formula for itself, has voiced support for Hong Kong.

“It’s clear the CCP regime’s ‘one country, two systems’ is nothing but a lie. I urge the global community to support the people’s struggle for freedom & fully democratic elections,” he said, referring to the Chinese Communist Party.

Chinese censors have been working hard to erase or block news of the Hong Kong protests, wary that any large public rallies could inspire protests on the mainland.

Screens went black on the BBC and CNN when they showed related reports in mainland China, as has happened during previous Hong Kong protests. Foreign news channels are only available in luxury hotels and a handful of high-end apartment complexes in China.

State news agency Xinhua wrote an upbeat Chinese-language report about a government-arranged concert in Hong Kong to celebrate the handover, complete with descriptions of the audience singing the national anthem and how the performers showed their “ardent love of the motherland.”

A state newspaper in China called for “zero tolerance” after the violence in Hong Kong overnight.

“Out of blind arrogance and rage, protesters showed a complete disregard for law and order,” the Global Times, published by the Communist Party’s People’s Daily, said in an editorial on Tuesday.

“Hong Kong shows that China cannot follow a Western political system. It’s too easy to be manipulated and to bring chaos,” wrote one Weibo user.

Another wrote: “When the children don’t listen, their mothers should give them a smacked bottom.”

Lam suspended the extradition bill on June 15 in a dramatic climbdown, saying she had heard the people “loud and clear”, but stopped short of meeting the protesters’ demands to scrap it and for her to step down.

Beijing-backed Lam called a news conference at 4am (2000 GMT Monday) to condemn what were some of the most violent protests to rock the city in decades.

She is now clinging to her job at a time of an unprecedented backlash against the government that poses the greatest popular challenge to Xi since he came to power in 2012.

The extradition bill, which would have covered Hong Kong’s seven million residents as well as foreign and Chinese nationals, was seen by many as a threat to the city’s much-cherished rule of law. 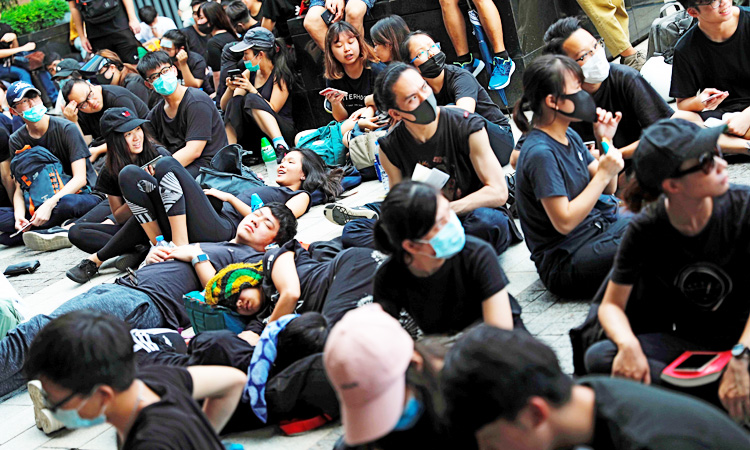