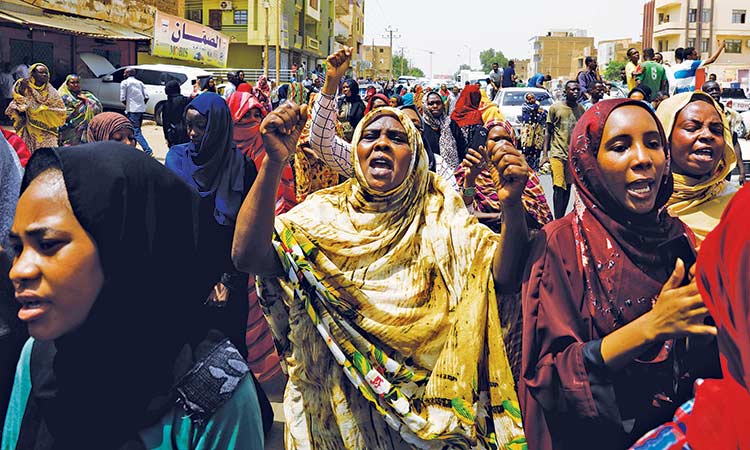 Locals and relatives of three Sudanese men riddled with bullets chant slogans as they carry the corpses in Omdurman. Reuters

The move, which aims to increase pressure on the ruling generals to hand power to a civilian administration, will be preceded by mass protests on July 13, the Alliance for Freedom and Change said in a statement.

The civil disobedience campaign, the second such general strike in less than a month, comes as protest leaders and ruling generals traded blame for the latest violence during the mass “million-man” march on Sunday that left 10 dead and scores wounded.

The Alliance for Freedom and Change’s announcement of the civil disobedience campaign was posted on the Facebook page of the affiliated Sudanese Professionals Association group.

“On Sunday, July 14, a civil disobedience and total political strike in Khartoum and across all provinces will be held,” the movement said.

The SPA initiated the huge protests in December that finally led the army to topple longtime president Omar al-Bashir in April. In the political instability that followed the generals seizing power, the protest leaders launched a similar civil disobedience campaign on June 9 that paralysed the entire country, although they called it off three days later following mediation by Ethiopian Prime Minister Abiy Ahmed.

Tens of thousands took to the streets for Sunday’s “million-man” march, seen as a test for protest organisers after a June 3 raid on a Khartoum protest camp left dozens dead and a subsequent internet blackout curbed their ability to mobilise support.

But that did not prevent vast crowds of men and women, chanting slogans demanding “civilian rule”, flooding the streets of Khartoum, twin city Omdurman and other towns and cities, AFP correspondents and witnesses reported.

The official SUNA news agency quoted a health ministry official and police as saying 10 people were killed in protest-related violence since Sunday and more than 180 wounded, including 27 by gunfire.

A doctors’ committee linked to the protest movement said five protesters were killed on Sunday, four of them in Omdurman, across the Nile from Khartoum.

It also said several more were seriously wounded by gunshots fired by “military council militias,” a term used by protesters for the feared paramilitary the Rapid Support Forces.

The 10 killed included three men whose blood-stained bodies were found on Monday in Omdurman where protests were held the day before.

The doctors’ committee said the three men had been “tortured” before being killed. The police confirmed finding the three bodies.

Crowds of people gathered around the bodies, chanting “Just Fall, Just Fall” -- a slogan of the protest movement -- an AFP correspondent reported, adding that riot police later dispersed the crowd with tear gas.

“The military council is completely responsible for these lives lost,” prominent protest leader Mohamed Naji al-Assam said in a video posted on his Facebook page.

But, he added, “the Sudanese have proven that they will not back down”.

The generals in turn blamed the protest movement, the Alliance for Freedom and Change, for Sunday’s violence.

“Freedom and Change... incited protesters to go toward the republican palace (prompting) police forces to use tear gas to disperse protesters,” General Jamal Omer said in a video posted on the ruling military council’s Facebook page.

“Freedom and Change bears the entire responsibility for these violations and the casualties among regular forces and citizens.”

Tension remains high between the protest leaders and generals since the June 3 raid, when armed men in military fatigues shot demonstrators who had camped for weeks outside army headquarters.