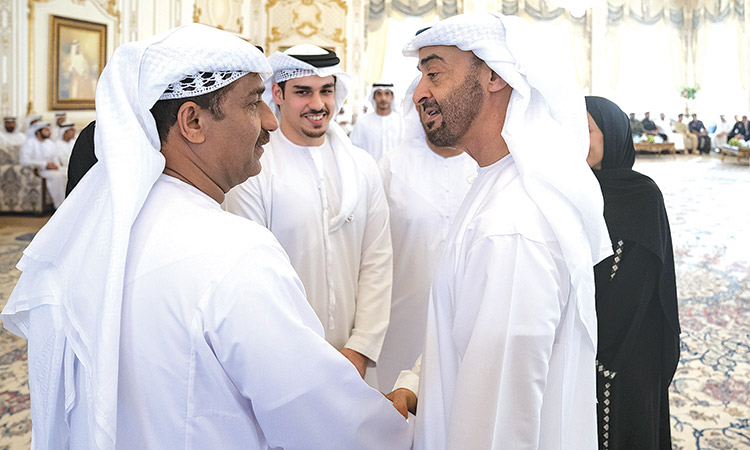 The Abitur certificate is conferred on students in Germany on passing their secondary school examinations.

Sixty-four Emirati students other than Al Hossani are currently studying at the German International School Abu Dhabi, following a directive by Sheikh Mohamed Bin Zayed in 2005 to set up the Educational Programme for Cultural Exchange. The programme seeks to enrol students in the most prestigious international curricula in line with a policy of openness towards other cultures and to encourage cultural communication.

During the meeting at the Sea Palace, Sheikh Mohamed Bin Zayed congratulated Ahmed Al Hossani, and wished him success, hailing him as a role model for other students.

His Highness expressed his pride in the potential of UAE nationals and their ability to achieve outstanding results and contribute to the service of their country and society.

Sheikh Mohamed Bin Zayed also emphasised the role of the family in providing students a conducive environment to achieve academic excellence, commending Al Hossani’s parents, who were present at the meeting for encouraging their son to excel academically.

Al Hossani is the first Emirati to receive the Abitur secondary education certificate from the German International School Abu Dhabi after faring very well in all his tests. This general higher education entrance qualification is the highest in the world, and includes modules focusing on critical thinking, analysis and creativity. The certificate enables students to study at German universities and other major international universities.

The meeting was attended by Sara Awad Issa Musallam, Chairperson of the Department of Education and Knowledge, ADEK, and Mohammed Salem Al Dhaheri, Advisor to the ADEK Chairperson.

Last month, Sheikh Mohamed Bin Zayed received at Qasr Al Bahr a delegation of the Emirati school who notched the second position at the VEX Robotics World Championship, which was held recently in Louisville, Kentucky, where they vied with 790 teams represented from 50 countries.

Sheikh Mohamed congratulated the delegates on the prestigious achievement which, he said, was made in a key area to which the UAE is attaching a paramount importance, namely Artificial Intelligence.

He underscored the importance of providing a learning-friendly environment to students in order to unleash their potential and hone their skills in a way that helps them make great strides in areas of modern technology.