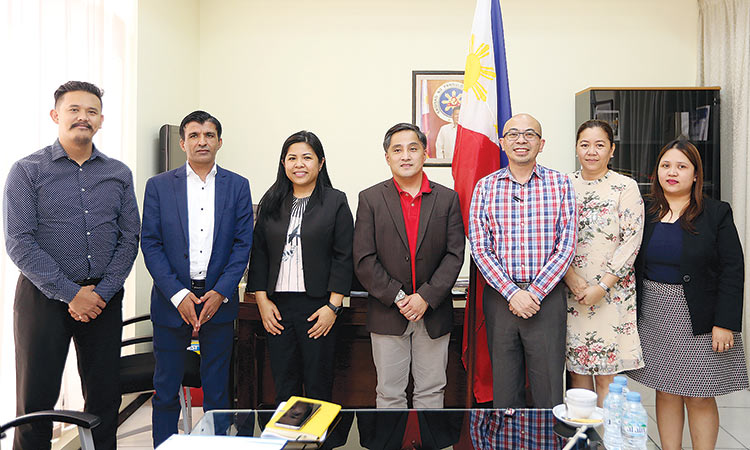 Philippine Consul General in Dubai and the Northern Emirates Paul Raymund Cortes (middle) along with the honorees. Kamal Kassim/Gulf Today

Being distressed means in dire need of legal assistance and/or as a result of untoward or unforeseen conditions.

Consul General Paul Raymund Cortes released the data on Tuesday afternoon when he and Deputy Consul General Renato Duenas Jr. presented to the media two of the diplomatic post’s officers recognized by Manila’s Department of Foreign Affairs (DFA) for their exemplary dedication and commitment to their duties and responsibilities in 2018.

Moreover, the entire PCGDXB-ATN Section which Vice Consul Marianne Bringas heads, was decided on by a DFA special committee, as the “Best ATN Team” from among 80 Philippine foreign posts across the globe for the entire 2018.

At the “120th DFA Founding Anniversary” held in June 23, 2018, PCGDXB was cited as the “Best Organization for 2017” as President Duterte conferred on Cortes the “Gawad Mabini-Dakilang Kamanong or Grand Cross,” one of the major respects bestowed on a Philippine diplomat.

It has been two years for Mupas at the PCGDXB from the DFA (Manila)-Consular Affairs Department.

Assigned as ATN-Undocumented Filipinos in-charge, she is responsible for all the assistance requirements rendered to all Filipinos who have come to the UAE, particularly those residing in Dubai, Sharjah, Ajman, Umm Al Quwain, Ras Al Khaimah and Fujeirah on visit or tourist visas; and for some reason or the other have found themselves in deep quagmire due to labour-related concerns namely contract substitution, maltreatment and all forms of abuse by the employer and even recruitment/manpower agency officials and personnel.

Mupas expressed hope that Filipinos back home and in the UAE would have the heart not to put any of their countrymen in any form of situation or circumstance as a result of the abuse and mis-use of the visit/tourist visa.

She expressed hope that any Filipino wishing to live and work abroad must be enlightened enough to know that the safest way for them to do so is through legitimate means because any shortcuts or circumvention of laws would lead them down the drain.

“I sometimes get affected by the seriousness of their situations. But I have to be strong before them so they would be encouraged to stand up again.”

Deployed at the PCGDXB since five years back, it was in 2017 and during her second assignment from 2015 at the Consular Section that Pimentel had thought of implementing a civil registry innovation specifically those of reports of birth and reports of death.Pimentel thought o f innovating, having herself experienced being weighed down with the referencing and search for these documents that let her give copies to clients over a week from the time of request.

With the help of PCGDXB IT experts, there is now an electronic database system shortening the release of requested copies within a day or two.

“Consul General Cortes has continually pushed us to be more pro-active and understanding. We will continually stand up to the challenges we face,” she said.

PCGDXB-ATN Section functions alongside the chosen legal retainer Sara Advocates & Legal Consultants whose assigned lawyer to the Filipinos in Dubai and the Northern Emirates is Atty. Eisa Khalife.