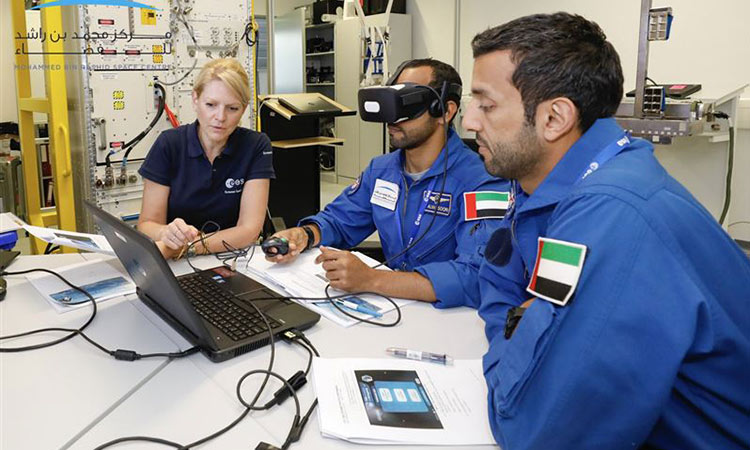 Hazzaa AlMansoori and Sultan AlNeyadi seen during one of the training sessions.

European unit, Columbus, onboard the International Space Station (ISS) was the focus of training.

Yousuf Hamad AlShaibani, Director General of MBRSC, and Salem AlMarri, Assistant Director General for Scientific and Technical Affairs at MBRSC and Head of the UAE Astronaut Programme also attended a part of the training.

AlShaibani was briefed on the training during an introductory tour to the various training departments at EAC, where he was shown the latest technologies and advanced and highly efficient scientific equipment used to train the two astronauts.

“EAC has advanced services, including the latest technologies and advanced scientific devices. This is a significant contribution to developing the skills and capabilities of AlMansoori and AlNeyadi,” said AlShaibani.

AlShaibani stressed that what he saw at EAC reflects the commitment of the UAE’s leadership to offer all the possibilities and modern technologies, to enhance the capabilities of the two astronauts to qualify to travel to the ISS, and return home safely to continue building the space sector in the UAE.

First Emirati astronaut is set to travel to the ISS on Sept.25, 2019, aboard the  Soyuz MS 15, and all the preparations and training are part of it.

The two Emirati astronauts have completed around 30 hours of theoretical and practical training, supervised by a group of ESA specialists, focusing on the equipment and systems in the European unit of the ISS, such as the Life Support System that ensures the survival of astronauts in ISS.

The training, all performed in a real like module of the European laboratory aboard ISS, Columbus, also included communicating with the ground station.

The Columbus Laboratory is ESA’s largest single contribution to the ISS, shared by Nasa and ESA to carry out the largest number of scientific researches in a virtually non-gravitational environment.

Under the supervision of researchers and trainers from ESA, the two astronauts were trained on the scientific experiments the UAE astronaut will be working on during his time onboard.

The training programme included four main types of scientific experiments: Time perception in microgravity (TIME), Brain DTI, Fluidics (fluid dynamics in space), and DNAm-age, which tests the changes that happen to human’s DNA due to traveling to space; it will be the first time that this experiment will be carried out on a human from the Arab region.

The UAE Astronaut Programme, funded by the ICT fund of the Telecommunications Regulatory Authority (TRA). Launched in 2007, this fund, which is the first of its kind in the Arab world, aims towards supporting research and development within the ICT sector in the UAE, helping it to grow into a nationally significant industry with a leading place in the world.

Salem AlMarri highlighted that these exercises prepare the UAE astronaut to work professionally in ISS different departments even in emergency situation, in addition to carrying out the scientific tasks that will be entrusted to him.

He noted that the first phase of both experiments the DNA- m age and TIME has already started at EAC where data and samples were collected from the UAE astronauts. These experiments aim to measure the impact of traveling to space and microgravity environment on human body.

The European Astronaut Centre (EAC) is responsible for selecting and training ESA astronauts. It consists of four sections, each section is specialised in a specific task such as training, medicine and education, and communicating with astronauts onboard the International Space Station via the ground control network.

EAC is mainly involved in empowering astronauts with the necessary expertise (such as training in a neutral buoyancy pool), and supporting them under the supervision of the Columbus Laboratory, which was launched to ISS aboard Space Shuttle Atlantis on February 2008 and named after the explorer Christopher Columbus. EAC trains astronauts on how to operate European hardware onboard the ISS, and ensures that they maintain high levels of health, fitness and proficiency, by providing expert medical care and general support to astronauts at all stages of a mission.

MBRSC oversees the UAE Astronaut Programme, which is part of the UAE National Space Programme, and aims to prepare the first Emirati astronaut corps to participate in global space exploration missions. The programme contributes to achieving the national strategy to develop young Emirati cadres and prepare future generations, according to the highest international standards, and achieve their aspirations to participate in scientific explorations, as well as the aspirations of the UAE in this field. 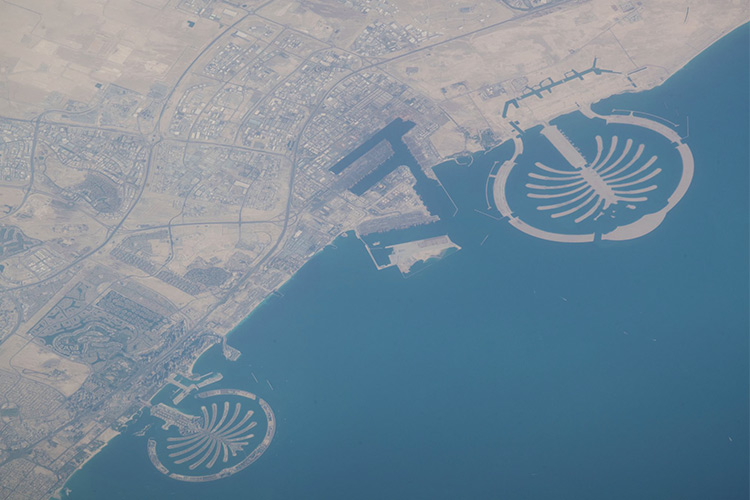