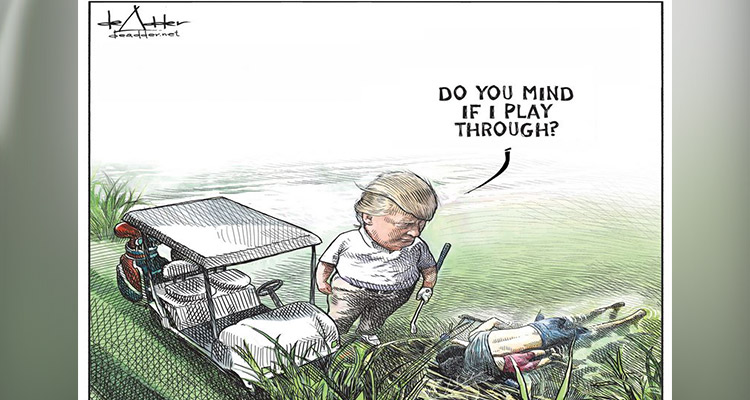 Canadian cartoonist Michael de Adder has lost his job in a publishing firm in New Brunswick after his illustration of US President Donald Trump playing golf over the bodies of two drowned migrants went viral.

The illustration was inspired by the now infamous image of Oscar Alberto Martinez Ramirez and his 23-month-old daughter Valeria, who died while attempting to cross into the US from Mexico after leaving El Salvador, HuffPost Canada reported.

The illustration caught the attention of people across Canada and the US, including actors George Takei and Mark Hamill, who said it was "Pulitzer Prize-worthy".

On Saturday, de Adder posted on Twitter that he was "let go" from all the newspapers owned by Brunswick News Inc: The Moncton Times Transcript, Fredericton Daily Gleaner, Telegraph-Journal and Telegraph Journal Saint John.

De Adder, however, said he was not "technically" fired as he was under contract.

Wes Tyrell, President of the Association of Canadian Cartoonists, claimed that the Brunswick newspapers avoided Trump as a subject of its cartoons - and de Adder "was doing them with regularity for the last couple of years".

"Cartoonist Michael de Adder was let go from his job drawing editorial cartoons for all the major New Brunswick newspapers 24 hours after his Donald Trump cartoon went viral on social media, a job he held for 17 years.

"Although he has stated there was no reason given for his firing, the timing was no coincidence," Tyrell said on Facebook.

Brunswick News Inc. said in a statement on Sunday that "it is entirely incorrect to suggest" that it cancelled a freelance contract with de Adder over the Trump cartoon.

"This is a false narrative which has emerged carelessly and recklessly on social media," the publishing company wrote. It said that de Adder never offered the Trump cartoon to the company and had already decided to "bring back" another cartoonist it said was popular with readers.

"Negotiations had been ongoing for weeks," it stated.