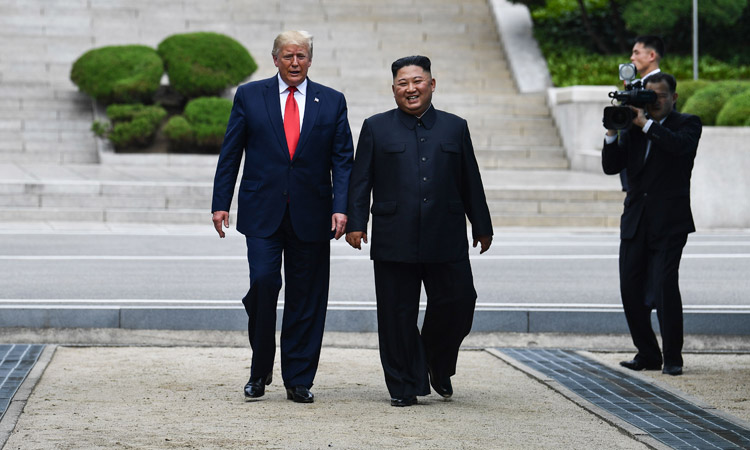 US President Donald Trump said he and North Korean leader Kim Jong Un agreed on Sunday to resume stalled nuclear talks when they met in the Demilitarised Zone (DMZ) between the two Koreas.

"The meeting was a very good one, very strong .. We'll see what can happen," Trump said after his talks with Kim. He said both sides would set up teams to push forward stalled talks aimed at getting North Korea to give up its nuclear weapons, adding he was in no rush for a deal.

Earlier,  Donald Trump stepped onto North Korean soil as he met Pyongyang's leader Kim Jong Un in the Demilitarised Zone dividing the peninsula, in a symbolic diplomatic spectacle and a first for any American president.

The two men then walked into Seoul's territory together -- pausing on the line for photographers -- where they were joined by South Korean President Moon Jae-in.

"It's a great day for the world and it's an honour for me to be here," Trump said. "A lot of great things are happening." 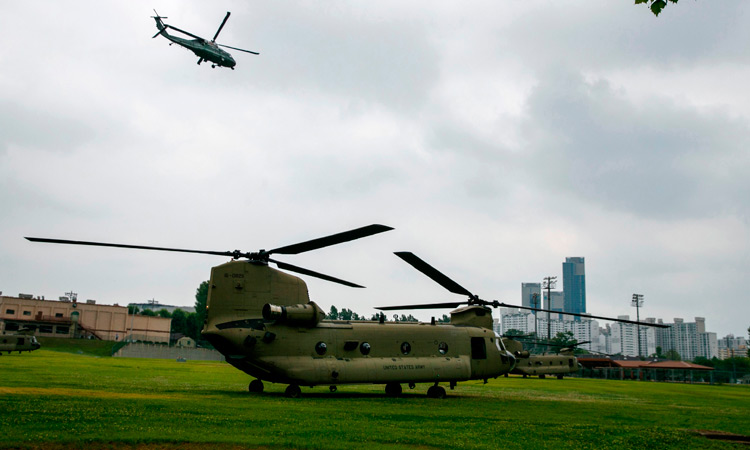 The Marine One helicopter carrying US President Donald Trump to the DMZ takes off from Seoul. Jacquelyn Martin/AFP

The impromptu meeting in the DMZ -- which came after Trump issued an invitation on Twitter on Saturday -- comes with negotiations between Pyongyang and Washington over the North's nuclear arsenal at a deadlock.

The two would "just shake hands quickly and say hello because we haven't seen each other since Vietnam", Trump said earlier.

Their first summit took place in a blaze of publicity in Singapore last year but produced a vaguely-worded pledge about denuclearisation, and a second meeting in Vietnam in February intended to put flesh on those bones broke up without agreement.

"It's a great day for the world and it's an honour for me to be here. A lot of great things are happening.

Contact between the two sides has since been minimal -- with Pyongyang issuing frequent criticisms of the US position -- but the two leaders have exchanged a series of letters and Trump turned to Twitter on Saturday to issue his offer.

"If Chairman Kim of North Korea sees this, I would meet him at the Border/DMZ just to shake his hand and say Hello(?)!," he wrote from from Osaka in Japan, where he was attending a G20 summit before flying to Seoul.

Trump's entry onto North Korean soil is a dramatic re-enactment of the extraordinary scene last year when the young leader invited South Korean President Moon Jae-in to walk over the Military Demarcation Line that divides the Koreas.

Donald Trump meets with Kim Jong Un at the border village of Panmunjom on Sunday.

Donald Trump looks on during a visit at the demilitarised zone separating the two Koreas. Kevin Lamarque/Reuters

Moon -- who seized on last year's Winter Olympics to broker the process between Pyongyang and Washington, after tensions soared in 2017 amid missile and nuclear tests and mutual insults -- will be going to the DMZ with Trump.

"The leaders of the US and the North will have a handshake for peace at Panmunjom, the symbol of division, for the first time," Moon said, referring to the "truce village" in the DMZ.

But analysts were divided over the headline-grabbing meeting's potential impact on the underlying issues.

The four-kilometre-wide (2.5 miles) DMZ, running for 250 kilometres, is where the front line lay when the Korean War ended with a ceasefire rather than a peace treaty, and is described as the world's last Cold War frontier.

John Delury of Yonsei University in Seoul said an encounter in the "barren no man's land that embodies the unhealed wound of post-WWII division, the Korean War, and 70 years of animosity" would help improve ties.

"The leaders of the US and the North will have a handshake for peace at Panmunjom, the symbol of division, for the first time.

"It's not just about denuclearisation and it's not all about a deal -- important as those are," he said. "If Trump and Kim meet & can announce some kind of interim agreement, that's great. If they meet and don't, that's ok too. If in the end they don't meet, it's good that Trump offered to."

But Joshua Pollack of the Middlebury Institute of International Studies cast doubt on what it could achieve.

The Hanoi meeting foundered amid disagreements on what the North -- which has carried out six nuclear tests and developed missiles capable of reaching the entire US mainland -- would be willing to give up in exchange for relief from sanctions that have crippled its economy.

What was needed, he added, was "something more than a one-page letter and another handshake".

The DMZ has been a regular stop for US presidents visiting the South, a security ally -- although Trump's helicopter was forced to turn back by fog in 2017 -- while Panmunjom saw the first two summits between Moon and Kim last year. 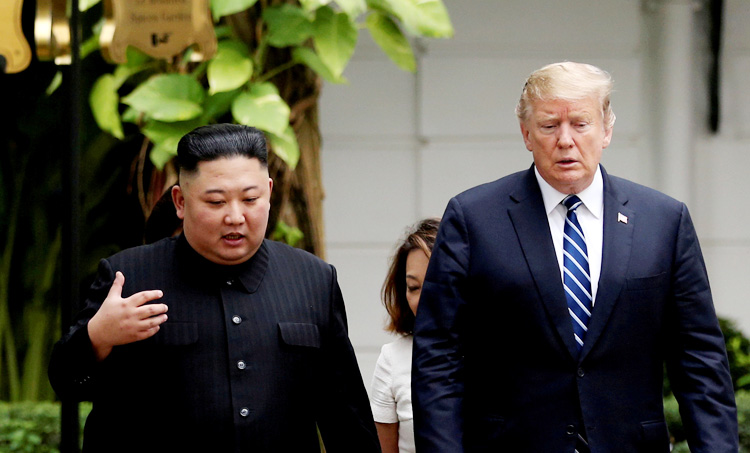