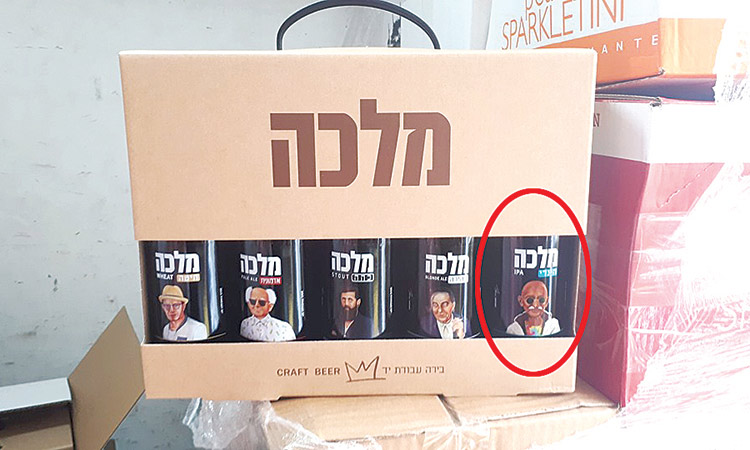 On Sunday, the foundation’s president, Eby J. Jose, wrote to both Modi and his Israel counterpart Benjamin Netanyahu seeking urgent action against the brewer to stop selling the brew using an artistic sketch of Mohandas Karamchand Gandhi.

“I noticed this in a video posted on TikTok by an Indian working in the Israeli state with a heavy heart,” Jose, who had been fighting against insulting the national heroes and symbols for long, told Gulf Today.

“I was shocked to see him at the bar counter, holding a beer bottle carrying a distorted image of the Father of the Nation. He posted it with a feeling of hurt like me, and I’m sure millions of Gandhians worldwide would have deeply hurt.”

In his letter, he says Malka Brewery in the Tefen Industrial Zone (central Galilee) made liquor bottles depicting historical leaders, including India’s independence icon who fought the British occupation.

“The world leader was also an individual who took a tough stand against consumption and promotion of alcohol,” he says. “The act of labelling the liquor bottle with his name and the image was downright despicable and deplorable, to say the least.” He reminds Modi that Gandhi had once said that in the event of him getting power, he would stop liquor manufacturing and sales in the country in one go.

Modi’s Gujarat, where Gandhi was also born, is one of the few Indian states where prohibition is in force, but bootlegging is rampant.

The image used on the liquor bottle was designed by Amit Shimoni, the Tel Aviv-based illustrator known for his hipster images. In the picture, Gandhi wears a cooling glass, a T-Shirt and an overcoat.

“On his website, there are many pictures and products of Gandhi being made a mockery,” Jose says.

“I request you to take immediate steps to communicate to the Israeli government and ask them to remove Gandhi’s derogatory images from liquor bottles and websites.”

In 2015, New England Brewing, a Connecticut-based craft beer company, apologised for a Gandhi-themed brew, Gandhi Bot, which was immensely popular, and renamed it as G-Bot.