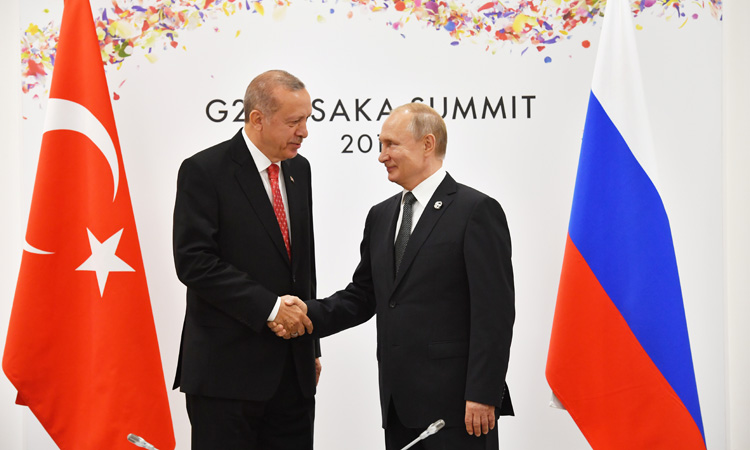 Putin (R) shakes hands with Erdogan during their bilateral meeting on the sidelines of the G20 leaders summit in Osaka, Japan, on Saturday. Yuri Kadobnov/ Reuters

Turkey has dismissed the warnings and said it would not back down, and ties between the NATO allies have become strained.

Speaking before talks with Russian President Vladimir Putin on the sidelines of a G20 summit in Japan, Erdogan said the deal for the S-400s showed improving ties between Turkey and Russia.

“Now, I believe eyes are on the delivery process of this issue, but there are no setbacks in our agreement here anyway,” Erdogan said.

He added that it was a priority for Turkey that the deal includes the joint production of the systems and a technology transfer.

Buying military equipment from Russia leaves Turkey vulnerable to US retribution under a 2017 law known as the Countering America’s Adversaries Through Sanctions Act.

The United States also says the S-400s are not compatible with NATO’s defence network and could compromise its Lockheed Martin F-35 stealth fighter jets, an aircraft Turkey is helping to build and planning to buy.

Under the possible US sanctions, Turkey faces expulsion from the F-35 programme among other measures that could deal a significant blow to Turkey’s already ailing economy and its defence industry sector.

Erdogan is also due to hold talks with US President Donald Trump in Osaka later on Saturday, in a meeting that has been described as Turkey’s last chance to avoid the sanctions.

Erdogan also said it was important for Ankara to finish the first reactor in the Akkuyu nuclear power plant by 2023, adding that non-nuclear equipment at the plant should be procured from Turkey.

Akkuyu is Turkey’s first nuclear power plant and is being built by Russia’s Rosatom along the Mediterranean coast, for a cost Erdogan has previously said would exceed $20 billion.