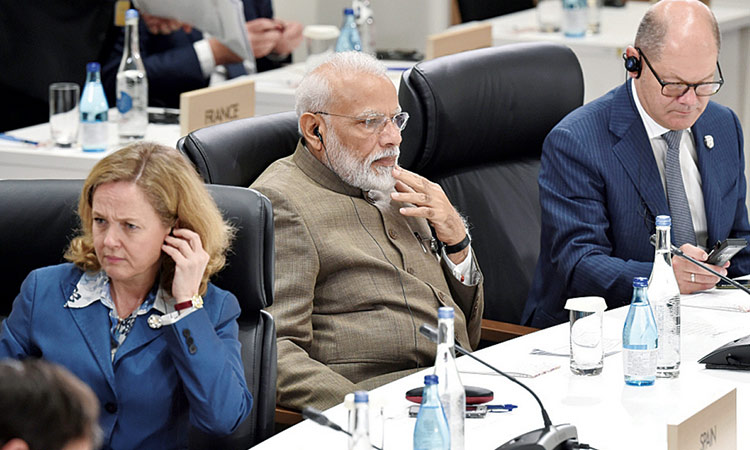 Narendra Modi attends the session on women’s workforce participation at the G20 Summit in Osaka on Saturday. Reuters

Addressing a session of G20 Summit here, he said the International Coalition on Disaster Resilient Infrastructure is needed for quick and effective measures after disasters strike as such tragedies mostly affect the poor.

The thinking behind the initiative is that every time a major disaster occurs, immediate relief and rehabilitation is given but thereafter small, vulnerable and developing countries are left to fend for themselves.

The initiative would be essentially a loose virtual coalition of countries which have capacity in handling post-disaster infrastructure development. That capacity could be in terms of financial or human resources support or utilisation of experience.

“Disaster resilient infrastructure is required not only for development but it is also necessary to combat natural calamities,” Modi said.

He recalled that he had stressed the need for such a coalition at the last G20 Summit held in Buenos Aires last year. “I invite the G20 countries to join this coalition and share their experience and expertise,” the Prime Minister said.

“At the #G20 Summit, invited other nations to join the International Coalition on Disaster Resilient Infrastructure. Let us close ranks for a safer planet,” he tweeted later.

“Disasters, natural or man-made, require quick and effective remedial measures. They invariably affect the poor the most,” he added in another tweet.

The Prime Minister’s view is that capacities around the world should be pooled in and utilised whenever a disaster occurs in any country and when the coalition is in place, the government of the affected country would know where to access help.

“This is a space which has not been filled by anybody yet,” Foreign Secretary Vijay Gokhale said recently, adding Modi felt that this is an area in which India, with its experience and capacity to handle disasters, can take a lead in.

At the G20 session, Modi also spoke about the need for proper healthcare and referred to India’s healing measures like Yoga and “our present efforts like the world’s largest healthcare programme, Ayushman Bharat.”

The Prime Minister pitched for cooperation in this field too, according to his Sherpa and former union minister Suresh Prabhu.

The Prime Minister also spoke about global challenges and highlighted India’s role in innovations in a manner that benefits all, Prabhu said.

Earlier, addressing the meeting, Modi said terrorism is the biggest threat to all of the humanity, as it not only takes the lives of innocent people, but also has huge adverse effect on economic progress and social stability.

“We have to stop all the means of support and help available to terrorism and racism,” he emphasised.

Modi noted that he recently called for a global conference on terrorism as “lack of necessary consent to fight against terrorism cannot keep us deedless.” Among the two other main challenges facing the world, the Prime Minister spoke about recession and uncertainty in world economy.

“On the other hand, the lack of resources is reflected in the fact that there is an estimated deficit of $1.3 trillion for investing in infrastructure development of emerging market economies,” Modi added.

Another major challenge, he said, is to make development and progress inclusive and sustainable.

“Rapidly changing technologies such as digitisation and climate change are not just challenges for us, but for the future generations also. Development is truly development in the right direction when it reduces inequality and contributes to the empowerment,” he said.

Making some recommendations, he said the synergy between BRICS countries can lead, to some extent, to the resolution of the side effects of unilateral decisions.

“We have to keep on emphasising for reformed multilateralism in international financial and business institutions and organisations for the necessary reforms. For sustained economic growth, the required resources such as oil and gas are needed to be constantly available at low prices,” Modi said.