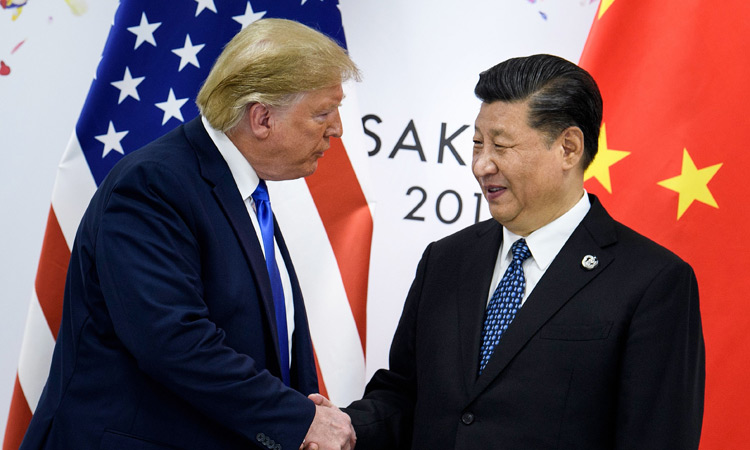 Xi Jinping (right) shakes hands with Donald Trump before a bilateral meeting at the G20 Summit in Osaka. Brendan Smialowski/AFP

The Group of 20 summit meeting in Osaka wrapped up Saturday as on the sidelines President Donald Trump and his Chinese counterpart Xi Jinping agreed to restart talks on the trade war between the two largest economies.

Turkey's Erdogan says no setbacks in S-400 deal with Russia

The leaders then began talks on other priorities, including the pressing issue of committing to faster progress in countering climate change, which many participating hope will be included in a slew of concerns incorporated into a communique due to be issued a bit later.

"In our view, climate change will determine the destiny of mankind, so it is imperative that our generation makes the right choices," Wang Yi, the Chinese foreign minister, said in a news conference with his French counterpart and UN Secretary- General Antonio Guterres. 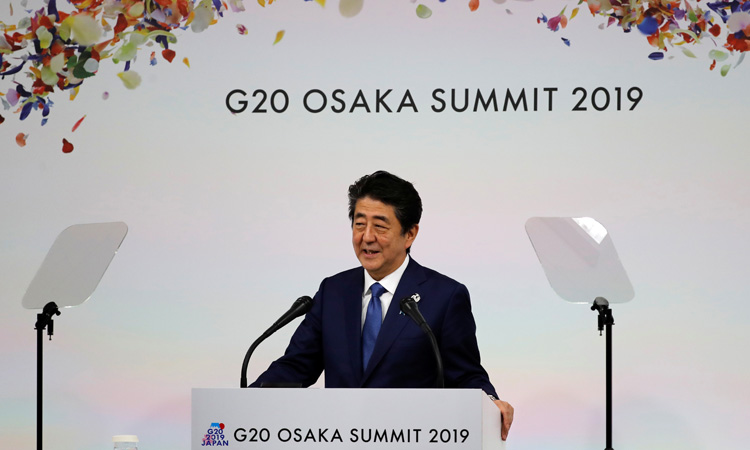 Shinzo Abe attends a news conference at the final day of the G20 leaders summit in Osaka. Jorge Silva/Reuters

Group of 20 leaders clearly confirmed the need for a free, fair and non-discriminatory trade policy at a two-day summit that ended on Saturday, Japanese Prime Minister Shinzo Abe said.

"The G20 leaders agreed on the need for member countries to spearhead strong global economic growth," while standing ready to take further action if needed, he said.

The G-20 leaders have long sought to present a united front in promoting open markets and calling for smart policies to fend off threats to global economic growth. But the schisms over such issues as protectionism and migration are straining efforts to forge the usual consensus on a broad array of policy approaches and geopolitical issues.

Using Twitter, Trump caused a stir Saturday when he invited North Korea's Kim to shake hands during a visit the US president planned to make to the heavily armed Demilitarised Zone between the Koreas on Sunday. "If Chairman Kim of North Korea sees this, I would meet him at the Border/DMZ just to shake his hand and say Hello(?)!"

"All I did is put out a feeler if you'd like to meet," Trump said later of the invitation, adding that he's not sure of Kim's whereabouts.

North Korea's First Vice Foreign Minister Choe Son Hui responded by saying it was a "very interesting suggestion," and the meeting, if realized, would serve as "another meaningful occasion in further deepening the personal relations between the two leaders and advancing the bilateral relations."

She said that North Korea still hasn't received an official proposal for the meeting from the United States.

Trump has at times found himself at odds with other leaders in such international events, particularly on issues such as Iran, climate change and trade.

China has sought support for defending global trade agreements against Trump's "America First" stance in gatherings like the G-20.

Vladimir Putin and Abdel Fattah al-Sisi attend a meeting on the sidelines of the G20 leaders summit in Osaka. Yuri Kadobnov/ Reuters

World leaders prepare to attend a press conference at the venue of the G-20 summit in Osaka, on Saturday.

The highlight of Trump's visit to Osaka was a meeting Saturday with Xi that has raised hopes the world's two largest economies might resume talks over their festering dispute over technology and China's chronic trade surplus.

As they began their meeting, Xi spoke of the "ping-pong diplomacy" that helped launch normalization of relations with Beijing. In the 40 years since the two countries restored ties, he said, "one basic fact remains unchanged. China and the US both benefit from cooperation and lose in confrontation."

Trump told Xi he wants to "even it up in respect to trade," and that he thought it would be very easy to do.

Afterward, Trump said the talks were "back on track."

China's official Xinhua News Agency said Xi and Trump had agreed to restart trade talks "on the basis of equality and mutual respect" and that the US side agreed not to add new tariffs on Chinese exports.

"If Chairman Kim of North Korea sees this, I would meet him at the Border/DMZ just to shake his hand and say Hello(?)!

The meeting had raised hopes for reviving negotiations that stalled in May. It's unclear, however, if they have overcome the obstacles that brought the talks to a halt earlier.

The two sides have levied billions of dollars' worth of tariffs on each other's products.

Abe has sought to make the Osaka summit a landmark for progress on environmental issues, including climate change, and cooperation in developing new rules for the "digital economy," such as devising fair ways to tax companies like Google and Facebook. It also includes strengthening precautions against abuse of technologies such as cybercurrencies to fund terrorism and other types of internet-related crimes.

At the meeting on women's empowerment, Ivanka Trump, adviser to Trump, said Saturday that the world economy would get a boost of up to $28 trillion by 2025 if women were on an equal economic footing. She was speaking at a special session on the issue at the G-20 summit in Osaka that included her father. She described improving the status of women as "smart economic and defense policy."

Queen Maxima of the Netherlands, the UN secretary-general's special advocate for inclusive finance for development, said "it is really necessary to close this gap for women to be economically empowered."