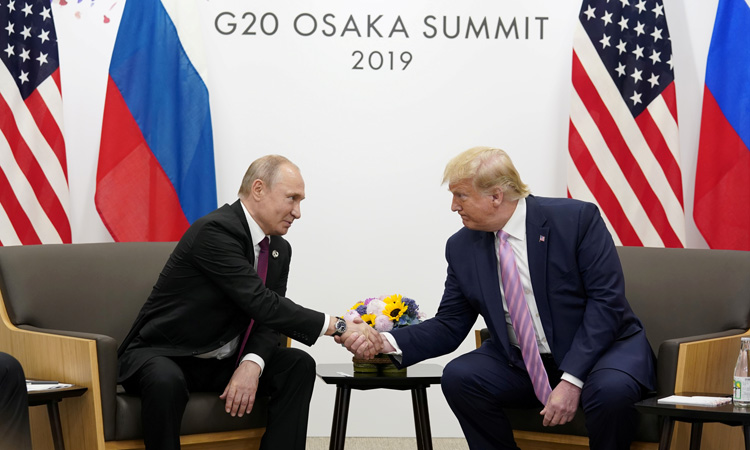 Putin and Trump shake hands during a bilateral meeting at the G20 leaders summit in Osaka, Japan, on Friday. Kevin Lamarque/ Reuters

“It’s a great honour to be with President Putin,” said Trump, who last held face-to-face talks with the Russian leader in Helsinki in 2018.

“We have a very, very good relationship,” Trump said.

The keenly awaited meeting between the pair has been overshadowed by a probe into Trump’s relations with Russia and the controversy that erupted the last time he held talks with the Kremlin leader.

Asked before travelling to Japan about the planned talks, Trump told reporters the content of the discussions was “none of your business.”

“I’ll have a very good conversation with him,” Trump told reporters at the White House. “What I say to him is none of your business.”

Trump has been dogged throughout his presidency by allegations of suspicious ties to Russia.

A major probe led by special prosecutor Robert Mueller found there was an organised Russian campaign to influence the 2016 election won by Trump. It found contacts between Russian operatives and Trump’s election campaign, but no evidence of a joint plot.

Trump has characterised Mueller’s findings as a complete exoneration. However, he remains under fire from opponents for what they say is his consistently opaque relationship with Putin.

In Helsinki last year, Trump refused at a joint press conference with Putin to criticise Russian interference in the 2016 election and said that he believed the Russian leader’s denials.