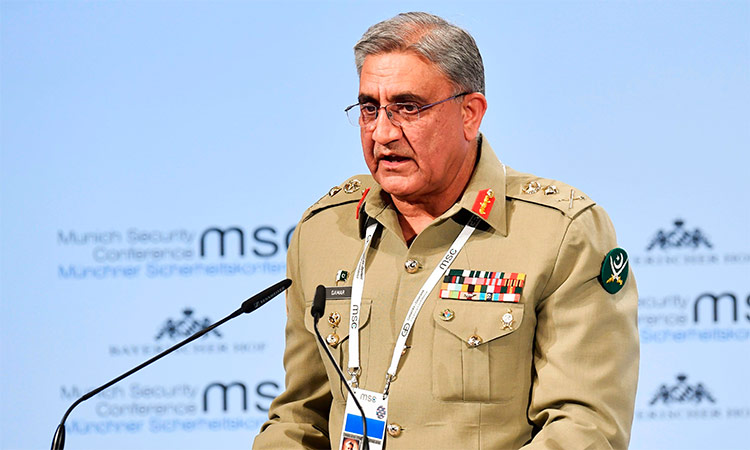 Army chief on Friday blamed “fiscal mismanagement” for the country’ economic woes, days after he was appointed to a newly formed committee responsible for steering the economy.

Though the military has extensive business interests and dominates foreign and security policies, it is unusual for an army chief to comment on how the economy is run by a civilian government.

The comments from General Qamar Javed Bajwa come days before the board of the International Monetary Fund (IMF) is due to decide whether to approve a $6 billion bailout for cash-strapped Pakistan, which is trying to avoid a balance of payments crisis.

“We’re going through a difficult economic situation due to fiscal mismanagement,” Bajwa told a seminar at a military-run defence university in the capital, Islamabad, according to a statement issued by the military’s publicity wing.

Prime Minister Imran Khan, who is seen as close to the generals, blames economic problems on the previous administration that left office in mid-2018, after a period of tension with the military.

The military, which has ruled Pakistan for about half the time since independence in 1947, has been taking a more active role in economic affairs since Imran came to office.

The government last week made Bajwa a member of the National Development Council (NDC), which is headed by Imran and has been given the responsibility of making major economic decisions.

Bajwa’s inclusion in the committee had “formalised the military’s role in the economic policy making,” said Yousuf Nazar, a former head of emerging market equity investments at Citigroup in London and author of a book on Pakistan’s political economy.

“We seem to be following what was practised in Turkey for decades and failed,” he said.

The leader of the main opposition Pakistan Peoples Party (PPP), Bilawal Bhutto Zardari, has questioned the legality of the council.

Pakistan’s economic outlook has sharply deteriorated over the past year.

Growth is expected to come in at 3.3% this fiscal year, ending at the end of this month, compared with 5.2% the previous year.

Growth is forecast to ease to 2.4% in the next financial year.

The government said in its annual budget statement this month, it expected a fiscal deficit of 7.1% this year, down from 7.2% the previous year. The rupee has lost more than 50% of its value since December 2017.

Bajwa told the seminar that the military was doing its bit to confront the economic challenges by cutting costs.

The defence budget was increased by 20% last year but the military decided to forgo a big increase in the 2019-20 fiscal year.

According to Swiss National Bank’s (SNB) annual statistics report money kept by Pakistani nationals and enterprises in Swiss banks fell by 33 per cent to a record low of CHF380 million (Rs63 billion) in 2018, falling below the level of Indian funds for the first time in four years.

The report also signals the first time in four years that Pakistan has been surpassed by India, which accounted for over CHF572 million (Rs95 billion). Nothing in the report suggested that the funds are from illegitimate sources. It may be interesting to note that the official figures disclosed by the SNB do not include the money that the foreign clients of Swiss banks might have kept in the name of shell companies.

This will ensure that financial information on bank accounts held by Pakistani citizens in Switzerland and vice-versa will be shared annually on an automatic basis. It is expected that both countries will begin collecting banking data from 2020 and exchange information on an annual basis from 2021.

It was reported that India has already started the automatic exchange of banking information with Switzerland. Switzerland first signed the Multilateral Convention on Mutual Administrative Assistance in Tax Matters in 2014.