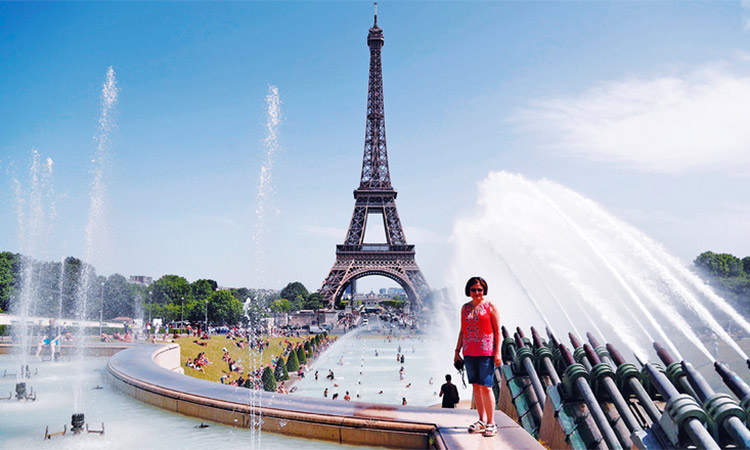 People bathe in the Trocadero Fountain near the Eiffel Tower in Paris on Friday. Agence France-Presse

It is too soon to definitely attribute Europe’s current blistering heatwave to climate change but it is “absolutely consistent” with extremes linked to the impact of greenhouse gas emissions, the United Nations agency said.

“We are still only the end of June, but it seems like the earth is set to experience its five warmest years on record, so that is 2015 to 2019 inclusive,” she said. From January to May, 2019 ranked as the third warmest year, she added.

G20 negotiators in Osaka, Japan are wrangling over the wording of a summit communique on fighting climate change, with the United States seeking to dilute the language against European opposition, according to sources and drafts of the text.

France registered its highest temperature since records began on Friday as the death toll rose from a heatwave suffocating much of Europe.

Temperatures in parts of Spain were expected to hit a new June record of 43°C.

Since 1975, Spain has registered nine heatwaves in June. Five of them, however, have been in the last decade, according to the Spanish meteorological office.

In Catalonia, northeast Spain, wildfires were raging across 60sq km of land, but firefighters said that area could quadruple. Farmers were asked to stop all work across the region for 48 hours.

In France, one boy was seriously hurt when he was thrown back by a jet of water from a fire hydrant.

Some 4,000 schools were either closed or running a limited service to help working parents unable to stay at home.

French families with elderly relatives who were ill or living alone were advised to call or visit them twice a day and take them to cool places, while the state-run rail operator SNCF offered free cancellations or exchanges on long-distance trips.

The greater Paris region, Ile de France, had already banned more than half of cars from its roads as the stifling heat worsened air pollution, the toughest restriction provided for — although all cars were to be allowed to leave the city as school holidays began. The cities of Lyon, Strasbourg and Marseille have also restricted traffic.

The unusually high temperatures are forecast to last until early next week.

The record-breaking heatwave in western Europe may trim grain harvest production but the searing heat is not expected to last long enough to cause the kind of severe crop losses seen during a drought last year.

Reaction on grain markets has been tempered by expectations that the heatwave will be shortlived, good field conditions following recent rainfall, and the fact many winter crops have already neared the end of their growth.

“We expect yields to be decreased due to the current heat wave. However, impact at this stage of development will likely be moderate at worst,” said Jose Clavijo, crop analyst with Refinitiv Agriculture Research.

Some forecasters have been reducing estimates for European Union production of soft wheat, the bloc’s main field crop, but projections generally remain above 140 million tonnes and well up from last year’s drought-diminished harvest of 129 million tonnes.

In France, the EU’s biggest grain producer, most analysts and traders were expecting limited yield losses.

“We could lose 0.3-0.5 tonnes per hectare for wheat that was in early grain-fillng stages. At the same time it could give a boost to protein levels,” a French grain broker said.

Protein is a measure of wheat quality and important in export markets.

The hot spell could allow French wheat harvesting to get going in the coming days, traders said.

It has helped accelerate France’s winter barley harvest and early results were confirming the crop had not seen negative heat effects because it was already mature, traders added.