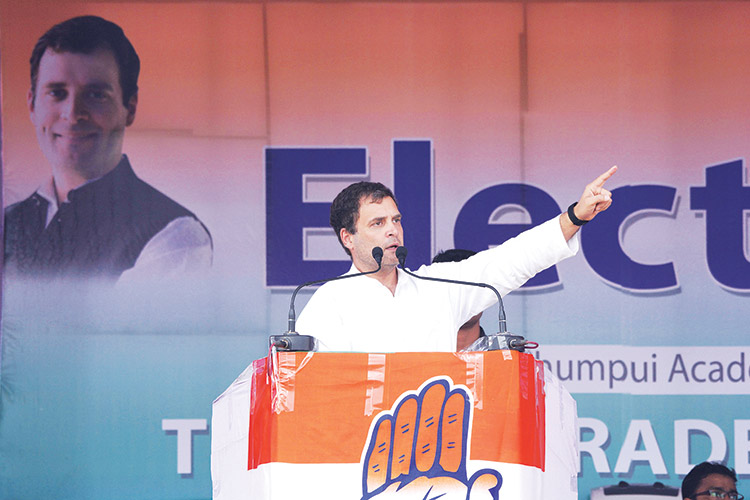 The reality of Rahul Gandhi's exit seems to be sinking in for Congress leaders at last. While they remained confident that the Nehru family scion would finally decide to stay on as party president, latest indications showed that they are now convinced he will not.

On Friday, the first time after the Lok Sabha elections, a senior leader of the Congress for the first time admitted that there is "not even 1 per cent possibility that Rahul would stay on. Besides, a whole lot of Congress leaders holding key positions resigned on Friday ahead of a planned Congress Working Committee (CWC) meeting.

Hours after Vivek Tankha quit as the party's Chairman for Law and RTI cell, many others from Delhi, Madhya Pradesh and Haryana too gave up their posts.
Tankha resigned on Thursday night saying the Congress cannot afford a stalemate for too long and urged Gandhi to revive the Congress as "a fighting force".
In a series of tweets on Friday, Tankha said: "We all should submit our resignations from party positions and give Rahulji a free hand to choose his team... Party cannot afford a stalemate for too long."

Veerappa Moily, a former chief minister of Karnataka and law minister in the Manmohan Singh government, suggested that Rahul's exit looks like a certainty.

Moily, a CWC hastened to add that the top decision-making body could persuade Rahul to stay.

"Anything can happen," he said. "Today, I don't... (think there) may be even one per cent (possibility) of his (Gandhi's) coming back. CWC will definitely meet before they consider any other name. Unless his resignation is accepted by CWC, speculations and his assertions will go on," he told news agency PTI.

On Thursday, in a meeting with Congress leaders from Haryana, a state where the party did not win a single Lok Sabha seat, Rahul stood firm that he is quitting. But his intention was clear when he told them: "I cannot ask others to resign too. It is up to them if they want to take responsibility.” Rahul seeks a total revamp of the party, sources close to him said, asserting that he's not playing a drama.

At least 80 Congress leaders have left their posts on Friday as the reality hit them.

AICC secretaries, youth Congress leaders, Mahila Congress office bearers are among those who have signed a mass resignation letter that is under circulation. It says: "I would like to immediately resign from my post in respect and honour of Rahul Gandhi." The first to resign was Vivek Tankha, the Rajya Sabha member whowanted to give Rahul Gandhi "a free hand."

"We all should submit our resignations from party positions and give Rahul-ji a free hand to choose his team. I welcome Mr Kamal Nath's statement to that effect. I unequivocally submit my resignation as AICC Dept chairman Law, RTI and HR. Party cannot afford a stalemate for too long," he said on Twitter.

"Rahul-ji please make drastic changes to revive the party as a fighting force. You have the commitment and determination. Just cobble a good, acceptable and influential nation-wide team. I am with you in all situations," Tankha said.

Two working presidents of the party in Delhi and Telangana and 120 other office bearers across the country later put in their papers.

Many of them said they would not withdraw their resignation until Rahul promised to stay on as the Congress chief.

On Friday Rahul met senior leaders of the party’s Delhi unit including its president Sheila Dikshit whom he had kept away ever since the party's crash in Delhi. Ahead of the state Assembly elections due next year, he advised them to put up a united face.

Their prayer to him was: Please stay on. He didn't respond, Congress sources said.

The seven party candidates who contested the Lok Sabha polls were present. A section led by Dikshit had resisted any alliance with the Aam Aadmi Party. The two sides differed over seat sharing formula in Delhi as well as in Haryana. Demands have been aired for Dikshit's resignation.