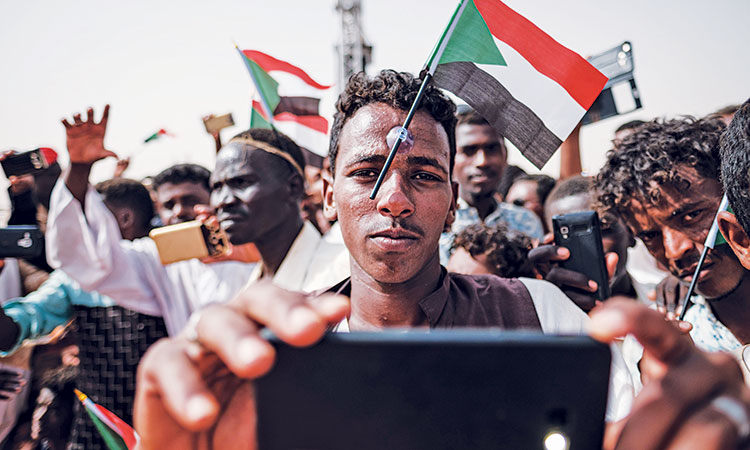 A man poses for a selfie photo with a cell phone during a rally in Abraq, Khartoum. Agence France-Presse

Sudanese riot police fired tear gas at scores of students who rallied against the ruling generals near the presidential palace in downtown Khartoum on Thursday, witnesses said.

Protesters have been staging sporadic and scattered demonstrations in recent days in the capital ahead of mass rallies called by protest leaders on Sunday against the generals who seized power after the ouster of longtime Omar al-Bashir on April 11.

Chanting “freedom, peace, justice”, the catchcry of the protest movement that brought down Bashir, about 300 students stepped out of their banking college in downtown Khartoum and held a spontaneous protest, witnesses said.

“Many of them were holding banners calling for civilian rule as they protested not far from the presidential palace,” a witness told AFP.

He said the riot police swiftly arrived and fired tear gas at the demonstration.

In the capital’s twin city of Omdurman, across the Nile river, about 100 lawyers gathered in front of a court holding placards calling for a civilian rule, witnesses said.

The lawyers were also calling for participating in the June 30 demonstrations.

The umbrella protest movement, the Alliance for Freedom and Change, has called for mass rallies in Khartoum and other cities on June 30 against the ruling generals.  It’s the first such nationwide call since a brutal crackdown on a protest camp outside the army headquarters on June 3 left dozens killed and hundreds wounded.

The crackdown was carried out by men in military fatigues after talks between protest leaders and generals collapsed over who should lead a new governing body — a civilian or soldier.

The ruling military council took power after the army ousted Bashir following months of nationwide protests gainst his rule.  But since then the generals have resisted to transfer power to a civilian administration as demanded by protesters and several Western countries.

About 130 people have been killed since the June 3 crackdown, the majority of them on that day itself, according to doctors linked to the protest movement.  Officials say 61 people died nationwide on June 3.

The UN Security Council on Thursday agreed on a four-month pause in the drawdown of a peacekeeping mission from Sudan’s Darfur region as leaders in Khartoum press on with difficult talks on a political transition.