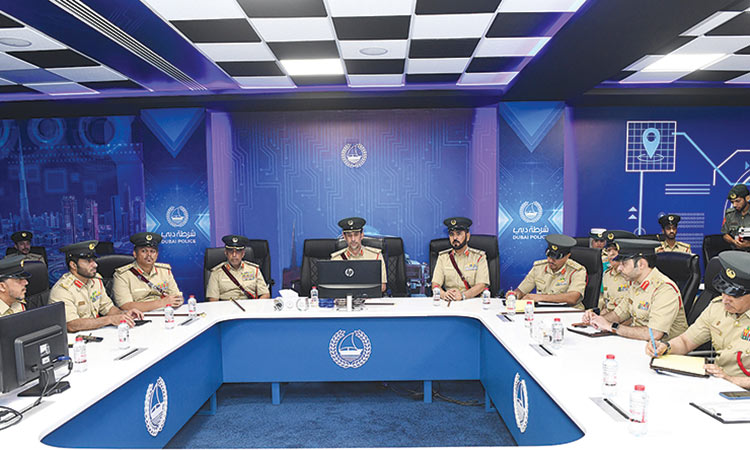 The Dubai Police Commander-in-Chief Major General Abdullah Khalifa Al Marri during an inspection visit to the police station stressed the importance of Al Rifa’a area, one of the vital commercial areas in Dubai.

He said the jurisdiction area’s status necessitates harnessing all possibilities to provide the best services to all clients, especially as it covers important tourist facilities in addition to diplomatic bodies and consulates.

He was received by the Assistant Commander-in-Chief of Criminal Investigation Major General Khalil Ibrahim al-Mansouri, the Police Station’s Director Brigadier Ahmed Thani Bin Ghulaita and a number of officers.

The police station achieved 87.4% per cent security coverage in 2018 – the target was 87% per cent. The average response time to emergencies was 7 minutes. For non-emergencies it was 8 minutes and 9 seconds.

The security programmes implemented by Al Rifa’a Police Station in specialised areas such as the “Observer” and “Al Rifa’a Eagles” programme led to the reduction of alarming crimes by 14.52% in 2018 compared to 2017.

He also praised efforts of the police station’s traffic affairs section and its personnel’s concern for the safety of road users and the preservation of lives through the good distribution of patrols in the jurisdiction area.

In 2018, the police station recorded 271 traffic mishaps in which one person died. It in 2017 registered 270 mishaps that resulted in one death as well. There were no fatal run-over accidents over the two years.

The police station also implemented the “6/6” initiative meant to boost traffic awareness among cyclists and honour those committed to traffic safety rules. “6/6” symbolizes meeting six out of six traffic regulations.

There are three regulations for the cyclist’s safety and security (wearing a helmet, wearing a reflective jacket and following traffic signs) and three for the cycle (availability of front and rear lights and proper brakes).

In 2018, the police station honoured 284 law-abiding cyclists in the labourers’ category.