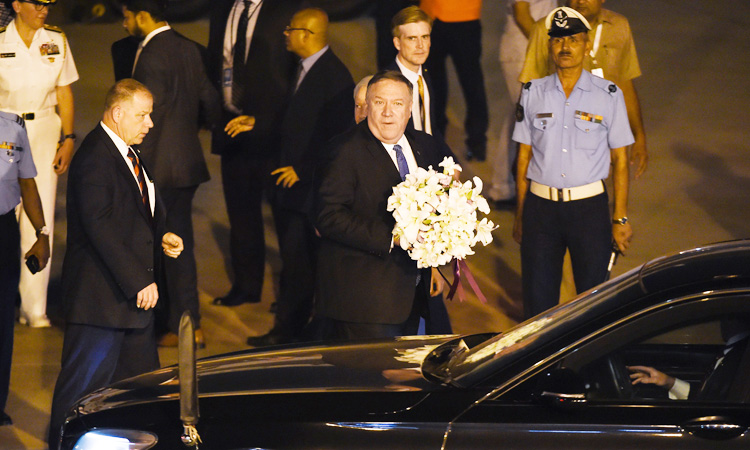 US Secretary of State Mike Pompeo arrives at the Palam technical airport in New Delhi on Tuesday for a state visit. Money Sharma/ AFP

As a democratic heavyweight in a region dominated by authoritarian China, New Delhi is a natural bedfellow in Washington’s effort to counter Beijing’s rise.

But President Donald Trump’s “America First” mantra and his easy resort to tariffs — in what he says is a bid to bring jobs back to the US — have complicated matters.

The relationship is particularly tricky because of India’s own well-developed protectionism, often expressed through red tape that prevents foreign companies from competing in the huge market of more than a billion consumers, critics say.

Pompeo’s talks with Narendra Modi come ahead of the Indian prime minister’s mooted meeting with Trump at the G20 in Japan later this week, where import levies are expected to loom large.

Last year Washington refused to exempt India from higher steel and aluminium tariffs in an effort to reduce the US trade deficit with India, which in 2018 stood at $24 billion, according to official data.

Ties deteriorated this month when the US ended India’s preferential trade status that allowed the Asian giant to send America $6 billion in goods duty-free every year.

India retaliated with tariffs on 28 items imported from the US, including almonds, apples and walnuts — products close to the hearts of voters in Trump’s rural base.

The bombastic US president, who frequently lashes out at trade and political partners, has dubbed India the “Tariff King.”

The US is also irked by what it sees as a growing thicket of Indian bureaucracy for US companies such as Walmart, which last year invested $16 billion in Flipkart in a major bet on the local e-commerce market.

Rising tensions between the US and Iran have also affected India, with US waivers allowing New Delhi to buy Iranian oil having expired in May. Media reports said India will press Pompeo for a new exemption.

Eliot Engel, the Democrat who heads the House Foreign Affairs Committee, said ahead of Pompeo’s visit that recent US actions were at odds with Trump’s promises that he would be a “true friend” to India.

Washington needs to show a “predictable, coherent, and consistent strategy,” Engel told Pompeo in a letter, and to counter a growing view that it is seeking to “coerce” India on a range of issues.