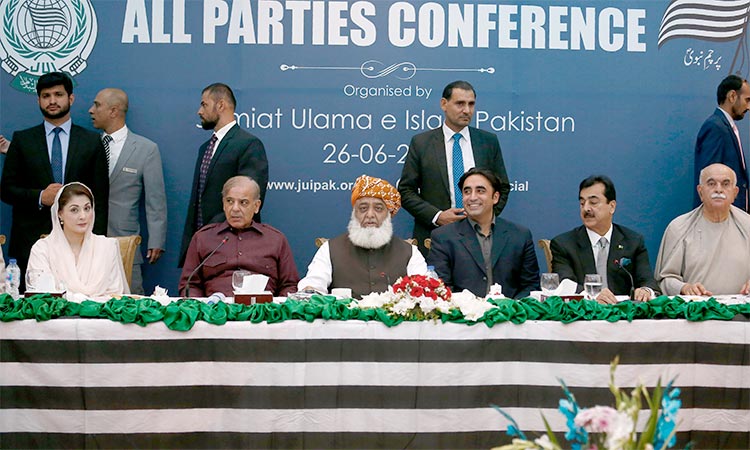 Top leaders of all major and minor opposition parties deliberated upon anti-government strategy and took different decisions in a Multiparty Conference (MPC) on Wednesday.

Rehman proposed resignations from the assemblies by the opposition lawmakers. He further suggested to observe a black day on July 25.

The PPP and the PML-N have constituted special teams to attend the MPC with a view to ensuring the presence of their MPs in the National Assembly during the voting process on the budget.

The Balochistan National Party-Mengal (BNP-M), a government ally, which had been attending opposition meetings despite sitting on the treasury benches, decided against showing up in the MPC. In a written message sent to Rehman, BNP-M chief Sardar Akhtar Mengal asked the opposition to consider his party’s recommendations.

The Jamaat-i-Islami, which is sitting on the opposition benches in the parliament, distanced itself from the MPC a few days back.

In the meantime, Mengal led a delegation of his party to a meeting with Prime Minister Imran Khan.

Prior to the MPC, the parliamentary parties of the opposition held a separate meeting inside the National Assembly to formulate their strategy for the budget session.

Earlier, PML-N Vice President Maryam Nawaz met her uncle, the party president and leader of the opposition in the National Assembly Shahbaz Sharif, at the Ministers’ Enclave to discuss matters related to the opposition moot.

The decision to hold the MPC had been made by the leaders of 11 opposition parties during a well-attended Iftar dinner hosted by PPP Chairman Bilawal in Islamabad last month.

He claimed that Prime Minister Imran Khan had saved Awan in the case, adding that the latter was being tried in the reference until he parted ways with PPP and joined the ruling party.

“Now we know why National Accountability Bureau (NAB) chairman [Justice (retd) Javed Iqbal] had maintained that the government would topple if corruption cases of PTI leaders were opened,” he said.

The PPP stalwart leader that the recent video scandal against the NAB chairman must be investigated properly to ascertain whether he was being blackmailed.

Members of treasury benches were being freed in corruption cases while leaders belonging to opposition parties subject to trial, he said, adding that it had become a tradition that forged corruption cases were withdrawn against anyone who leaves PPP for the Imran Khan-led party.

“Does withdrawal of fake corruption cases amount to price paid for leaving PPP? Why only Awan was given bail if corruption is reported in Nandipur reference?”

PML-N leader Ahsan Iqbal also came down hard on the PTI government, alleging it of influencing the ongoing accountability process.

“This is the type of accountability and justice taking place in our country. Awan accused by a commission constituted by the Supreme Court of causing Rs113 billion loss to Pakistan is given clean chit because the premier’s man,” he wrote on Twitter. Iqbal also urged the Supreme Court to take notice of verdict