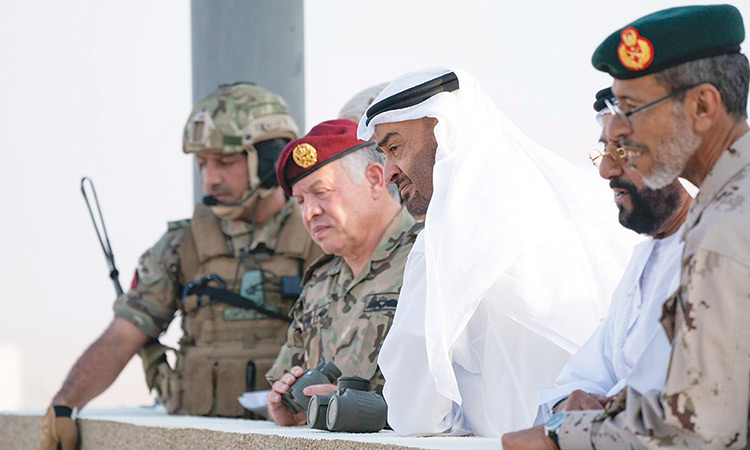 The two leaders made a tour of the exercise site, which included the Combat Training Centre and were briefed on the main components of the military games. The training covers an extensive range of aspects, on top of which came coastal defence, live ammunition and flares using various types of heavy and medium artillery.

“The military exercises seek to reinforce the combat readiness of the armed forces of the two countries at all levels,” Sheikh Mohamed added. Hailing the high-level of professionalism displayed by their armed forces, which, he said, demonstrates their high capability to stand up to all common threats and challenges.

“The UAE under the leadership of President His Highness Sheikh Khalifa Bin Zayed Al Nahyan, is seeking to advance the bilateral relations with Jordan at all the political, military, security and economic levels, specially that the two countries stand in one front against extremism and terrorism and are working together toward establishing peace, and development in the region and countering all intervention attempts into the internal affairs of Arab countries,” noted Sheikh Mohamed.

King Abdullah addressed the participating forces and thanked Sheikh Mohamed for his support to close ranks between the two countries’ arms.

“The military drills are a message addressed not only to the peoples of the two brotherly countries but to the whole region and entire world that we are all standing in one trench against any threat besetting us,” King Abdullah stressed.