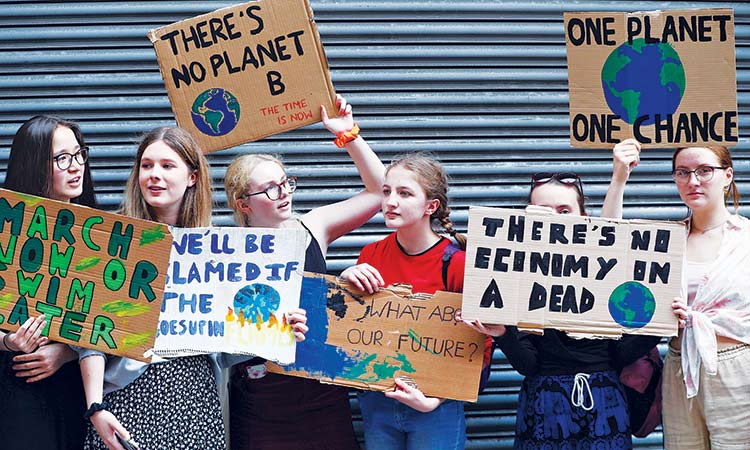 People hold placards as they attend a climate change demonstration in London. Reuters

Macron was speaking in Tokyo on a visit ahead of this week’s Group of 20 meeting, where climate change will be among several contentious issues on the table, along with trade and tensions with Iran.

Ghosn, a French citizen, once headed an auto alliance of Japan’s Nissan and Mitsubishi Motors and France’s Renault, and his arrest has laid bare tensions in the partnership.

“I have a red line,” he told a gathering of French citizens before meeting Abe.

“If we do not talk about the Paris accord and if, in order to find agreement among the 20 in the room, we are not able to defend climate ambitions, it will be without France.” “If one or the other of them doesn’t want to sign, they can say so, but we must not collectively lose our ambition,” he added.

Nearly 200 nations have signed the Paris climate agreement, which commits signatories to efforts to cap global warming at “well below” two degrees Celsius (3.6 Fahrenheit). But US President Donald Trump plans to withdraw Washington from the deal, a process that will take several years.

At a press conference after meeting Abe, Macron also raised the issue of trade tensions, urging a multilateral approach. Trump is expected to hold talks with China’s Xi Jinping on the sidelines of the G20, with hopes that the leaders can agree a truce in a trade war that has been damaging for the global economy.

“For me, the solution to the difficulties that we are encountering is not in bilateral accords, is not in bypassing international rules, is not in protectionism,” he said.

“It is very clearly in the modernisation of the multilateral trade framework,” he said.

And he and Abe said they had discussed tensions with Iran and wanted to help stabilise the region as fears grow that Washington and Tehran could be headed for military conflict.

Macron’s trip, which will see him become only the second foreign leader − after Trump − to meet Japan’s newly enthroned Emperor Naruhito, comes after a bruising time for ties between Paris and Tokyo.

The alliance has been tested by the arrest of Ghosn and increasingly strained relations between Nissan and Renault, with profound differences remaining over how the auto relationship should evolve. Renault has sought closer integration with Nissan, which the Japanese firm opposes.

Earlier Wednesday, Macron called the auto alliance something “we value highly”, urging all involved to “make it stronger in the face of international competition”.

“This is something we must do together,” he added.

Macron’s comments on the subject are being watched closely by Japanese officials, given that the French state holds a 15-percent stake in Renault.

Macron declined however to be drawn on the specifics of Ghosn’s case, saying it was not the role of the French state to intervene directly, beyond assuring Ghosn’s presumption of innocence and right to a defence.

After talks with Abe and the emperor, Macron and his wife Brigitte will stop briefly in Kyoto for a cultural visit before continuing on to Osaka where the G20 talks will run from June 28-29.

As pressure ramps up on governments to push through the large economic and social shifts needed to curb climate change, little consideration has been given to the potential consequences for civil and political rights, said a U.N. human rights expert. 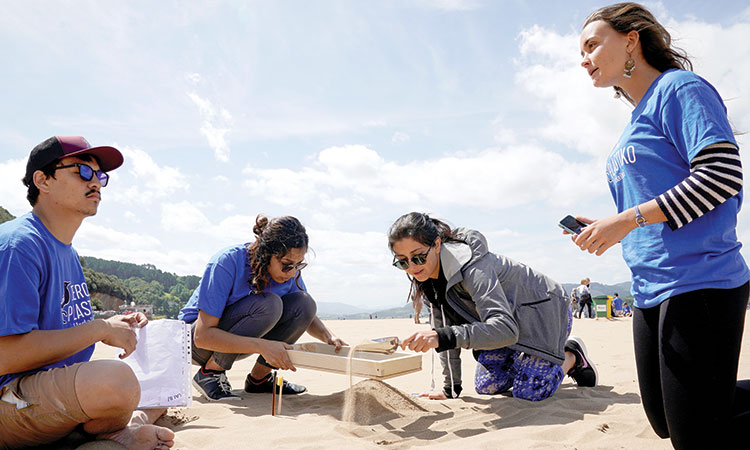