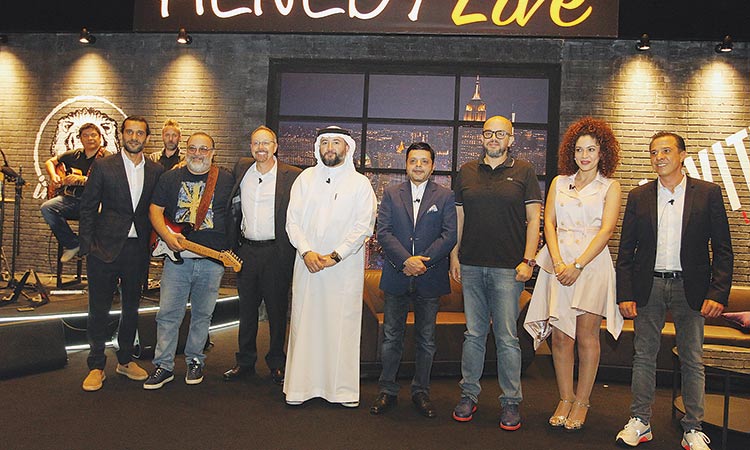 Mohamed Henedy at the press conference.

“Henedy Live” will feature the popular and talented Henedy in addition to Nada Moussa who will add a comic twist to the show and Chady Nashef who will keep the ambience upbeat with music. As for the topics presented, the writers Omar and Ahmed Taher will make the perfect match for “Henedy Live.”

The world tour is a collaborative production between Levity Live, a US-based entertainment company, which owns and operates the leading network of comedy venues in the US, and Impresario Live Group, a Dubai-based agency specialized in tailoring live entertainment concepts since more than 15 years with offices in Cairo, KSA, Beirut and Dubai. Other involved parties include Bookurstar Global, the booking agency of the world tour, Outback Concerts, its promoter in North America, and Khayal Events, its promoter across the Middle East and North African (MENA) region.

Henedy will be performing in major US cities before heading to Canada and then to Australia upon completing his shows across the Americas. The next leg of performances will be staged in Europe and Asia, followed by the MENA and wider Arab regions, such as the Saudi Arabian capital of Riyadh, Abu Dhabi and Dubai in the UAE, Kuwait, Beirut and several other cities.

“Henedy Live” marks the first stand-up venture in the career of the renowned Henedy who expressed his excitement to bring a new style of comedy to many Arab audiences around the world. “My sole purpose is to see people laugh, and being able to perform in a live setting is a golden opportunity for every comedian,” he said, emphasizing his excitement in acting live on stage despite his grand success in Cinema and TV.

“The idea of stand-up comedy has been long intriguing me, especially that I began my career on stage. My passion about theatre excites me to present my audience with this style of comedy for the first time, and I will be exploring different topics with them, hoping that they will enjoy the experience.”

Robert Hartmann, the Levity Live Founder said, “After my 37th year in the comedy business, I learned that there is a universal truth in comedy which transcends cultural differences and biases, and also allows us to share laughter instead of focusing on our differences. This is why it delights me to collaborate with a unique comedian talent such as Mohamed Henedy in his world tour and his US debut to share these experiences with people and give them a good heartfelt laugh.”

Kendra Ravagnani, official spokesperson of Impresario Live Group, said, “We are keen to offer exceptional shows to our audiences in the Arab region and the world. The collaboration with a great artist like Mohamed Henedy is a great opportunity to present ‘creativity’ in what meets the aspirations of stand-up comedy fans, and a chance to highlight the Arabs’ potential in this league.”

Faisal Al-Mokri, CEO at Khayal Events and Exhibition Management stated that working with Henedy will bring joy to Saudi Arabia, where the artist has a massive fan base. “A new era of artistic and cultural appreciation is unfolding in Saudi Arabia – one based on the new vision of the Kingdom, being realised by the dedicated efforts of our General Entertainment Authority and the Ministry of Culture.