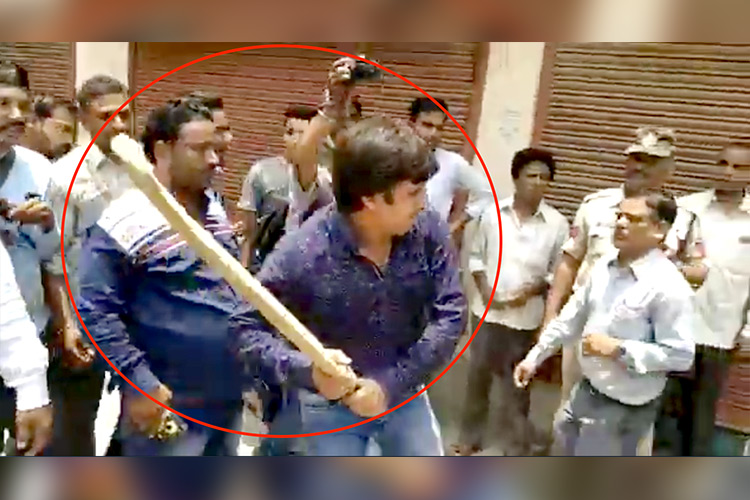 Akash Vijayvargiya (in circle) thrashing a civic official with a cricket bat is seen in this photo.

The MLA has been charged with wrongfully preventing public servant from performing his duty and causing violence.

The legislator was put through a medical examination in the government hospital before arrest. His supporters created noisy scenes before court.

Eyewitnesses said a team of the municipal corporation officials had reached the Ganji Compound area to pull down some dilapidated houses declared dangerous by the corporation.

The residents had been alerted about the plan to pull down the houses that could collapse during the rain.

The municipal authorities said the MLA was told about the risk faced by the residents of the houses which were sought to be demolished. The MLA had claimed the houses were not dilapidated.

The residents had reportedly informed the MLA about the possible action by Indore Municipal Corporation.

They had also threatened the corporation officials to leave the area in five minutes or prepare for dire consequences. They stoned the machinery that was brought to pull down the houses.

There were altercations between the corporation officials and the legislator. The goons accompanying the legislator had apparently informed the media about the possible adventure before assaulting the Corporation staff.

Akash Vijayvargiya came from behind the official who was talking on the phone and started hitting him. The police force deployed there remained mute witnesses. The public tried to snatch the bat from the MLA.

The MLA continued to hit the official before the police finally rescued him.

"I am an elected representative. It is my responsibility to sort out the issues between the residents and the authorities. I was making every effort. But the civic body officials were indulging in hooliganism and weren't listening to the people," Akash said.

"I was very angry. I don't remember what all I did. Let's see what happens," he added.

An FIR has been registered against Vijayavargiya and he has been booked for assault and obstructing a public servant from performing their duties. The police have also taken the statements of the two civic body officials.

Home Minister Bala Bachchan said: "You see, this is the real face and character of the BJP. They can't control their public representative. This is their conspiracy. We will take strict action against them."