Trump threatens attacks on Iran in retaliation for strikes - GulfToday

Trump threatens attacks on Iran in retaliation for strikes 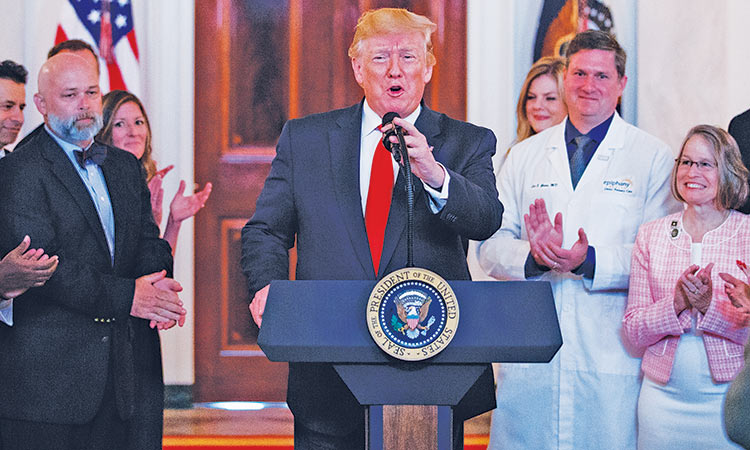 Donald Trump arrives to address a gathering in Washington on Monday. Associated Press

President Donald Trump on Tuesday threatened to attack Iran in retaliation for any strikes by Tehran “on anything American,” after Iran said new US sanctions precluded any diplomacy and called the White House actions “mentally retarded.”

“Iran’s very ignorant and insulting statement, put out today, only shows that they do not understand reality. Any attack by Iran on anything American will be met with great and overwhelming force. In some areas, overwhelming will mean obliteration.”

US disarmament ambassador Robert Wood said that the United States will continue with its maximum pressure campaign against Iran until Tehran changes its behaviour, and will look for ways to impose even more sanctions.

“We will look to see what more we can do on sanctions,” Wood said as he left the Conference on Disarmament in Geneva, the world’s main nuclear negotiating forum, where he had traded sharp accusations with an Iranian diplomat.

New US sanctions against Iran’s supreme leader and foreign minister have closed off diplomacy, Iran said on Tuesday, blaming the United States for abandoning the only route to peace just days after the two foes came within minutes of conflict.

The moves came after Iran shot down a US drone last week and Trump called off a retaliatory air strike minutes before impact, which would have been the first time the United States had bombed Iran in decades of hostility between them.

Trump said he decided at the last minute that too many people would die.

“Imposing useless sanctions on Iran’s Supreme Leader and the commander of Iran’s diplomacy is the permanent closure of the path of diplomacy,” Iranian Foreign Ministry spokesman Abbas Mousavi said on Twitter.

In a televised address, President Hassan Rouhani said sanctions against Khamenei would have no practical impact because the cleric had no assets abroad.

Rouhani, a pragmatist who won two elections on promises to open Iran up to the world, described the US moves as desperate and called the White House “mentally retarded” - an insult Iranian officials have used in the past about Trump but a departure from Rouhani’s own comparatively measured tone.

Rouhani and his cabinet run Iran’s day-to-day affairs, while Khamenei, in power since 1989, is Iran’s ultimate authority.

“The White House actions mean it is mentally retarded,” Rouhani said. “Tehran’s strategic patience does not mean we have fear.”

“The president has held the door open to real negotiations to completely and verifiably eliminate Iran’s nuclear weapons programme, its pursuit of ballistic missile delivery systems, its support for international terrorism and other malign behaviour worldwide,” Bolton said in occupied Jerusalem. “All that Iran needs to do is to walk through that open door.”

France warned Iran on Tuesday that a violation of its nuclear commitments to the 2015 nuclear deal would be a serious mistake and that France, Britain and Germany were making it clear to Tehran that it was not in its interest to do so.

Iran will take new steps to reduce its commitments under its nuclear deal with world powers on July 7, the Secretary of the Supreme National Security Council, Ali Shamkhani, said.

“Iran has announced its intention to no longer meet certain obligations of the Vienna agreement, in particular on the authorised stocks of low-enriched uranium from gas. They have announced this initiative for the coming days,” France’s Foreign Minister Jean-Yves Le Drian told lawmakers.