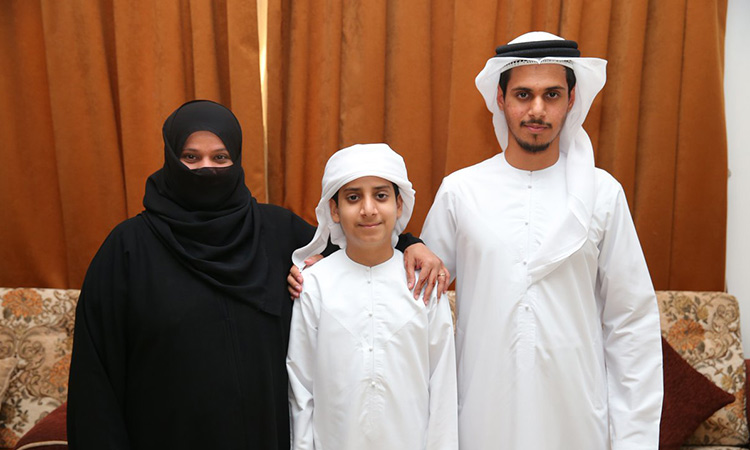 Abdulrahman Al Bastaki (centre) poses for a photograph with his mother.

Yes, by science, we can overcome the impossible, and education can help overcome difficulties, even if it’s life-threatening, such as cancer.

This is what UAE student Abdulrahman Al-Bastaki, who is 14 years old, has proved by defeating cancer and continuing his education, exams and excellence, from his bed of illness.

Abdulrahman finished the eighth grade this year, with distinction, despite his war with the disease. Today he continues to study in the ninth grade at Sheikh Mohammed School Bin Rashid in Dubai.

His family played a great role in supporting him, enabling him to face challenges and in his recovery.

The Ministry of Education opened a special channel through his website to continue his education and take exams during his treatment period in the US.

A reporter of Al Khaleej newspaper visited Abdulrahman after his return to the homeland, met his family and representatives of the Ministry of Education, and monitored the story of his academic excellence, which was the main reason to overcome the cancer that continued for two and a half years. Gulf Today is a sister publication of Al Khaleej.

Abdulrahman confirmed that he came to know about the disease in September 2017. Despite receiving treatment at Dubai Hospital, he was not aware of cancer until he travelled to America to complete his treatment.

He said, "During my treatment, I focused on my studies. Although my health did not give me the opportunity to take my textbooks to America, my brother coordinated with the Ministry of Education, which provided me with a special channel through its website. The full content of the lessons enabled me to take all the exams remotely.

He added that he had set up a system for studying the length of his stay under treatment, which was extended for a year and a half. His hours were between 3 and 4 hours a day, including two hours with the teacher in the hospital.

He said, "I was very proud to have started using the e-learning platforms because of the advanced position of my country and its adoption of the latest technical means to serve students.

It allows us to focus our efforts and make the most of our time through our ability to access educational curricula and other knowledge in every field easily. "

For his part, Umm Abdullah, the mother of the student, said: "We believe in God and His ability, and despite the difficult situation of Abdulrahman, his love of science and determination was very strong and helped him to overcome the difficult times of illness.”

“The biggest challenges encountered in the trip were treatment procedure and drugs, which had side effects.

“We focused on encouraging and supporting him in the study and achieve excellence. He relied on the use of means, social communication in consultation with his brothers.”

She continued: "There was a lot of confusion in the family because there were other brothers in the different stages of education.

"The Ministry of Education, through the head of the school, Abdullah Al-Hammadi, coordinated with school to provide a variety of channels for teaching and other examinations, which made Abdulrahman's education more flexible.”

Among the applications that enabled Abdulrahman to continue his distance education were electronic versions of students' textbooks, the Lesson Planner, a networking application linked to the Smart Learning Portal that allows teachers to create new study plans and modify existing plans participation with relevant teachers and the dissemination of lessons through it.

The Smart Author application is a platform for teachers to help them provide information to students by sending them assignments and educational resources.

EduShare (Education Sharing) is an e-learning digital content library that includes learning and learning resources such as lesson plans, content, research, multimedia and other forms of e-content. As well as the Learning Curve, a wide range of educational features that enable trainees to deal with the ever-changing technological environment and enjoy an easier and faster learning experience.

The doctors authorised to follow up Abdelrahman said that his health is stable and there is no evidence that the disease is present, explaining that the current follow-up is a kind of precautionary measure to prevent the spread of the disease.