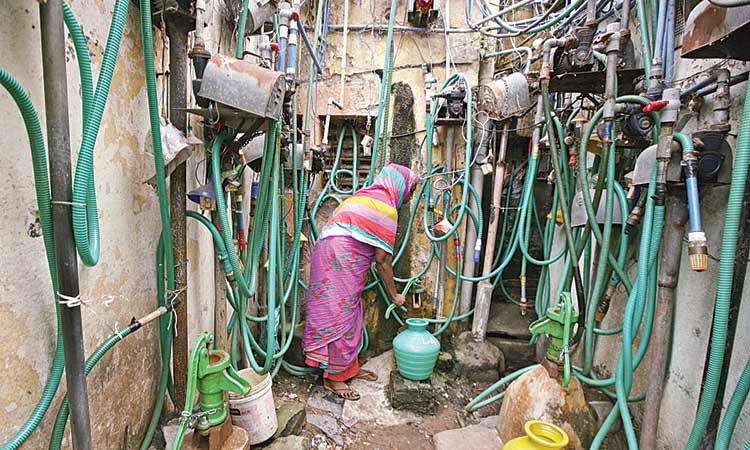 A woman uses a hand pump to fill up a container with drinking water in Chennai on Tuesday. Reuters

The CWMA admonished Karnataka for its failure to release the allotted water to Tamil Nadu in June despite its order as directed by the Supreme Court.

As Karnataka held up 9.1 tmc ft of water due for June, Tamil Nadu has not been able to provide water for irrigation of kuruvai crops that are usually sown on June 1.

The state has also not opened the gates of Mettur dam as per a June 12 schedule this year because there is no water. Farmers in the delta districts have thus been totally denied water for irrigation.

At the meeting, the fourth after the Authority was formed after a Supreme Court verdict, Tamil Nadu demanded release of 31.2 tmc ft of river water from Karnataka, which is its allocated quota for July.

The state also opposed the neighbouring state’s plan to build a dam across river Cauvery at Mekedatu near the border. The apex court had opposed the plan, but the central government has issued partial sanction.

Karnataka brought up Mekedatu at the meeting, but Tamil Nadu shot it down, pointing out that the release of pending water is the most urgent issue now.

Karnataka refuses to oblige, on a plea that it is in the grip of severe drought. Its combined storage of the dams - Krishnaraja Sagar, Kabini, Hemavathy and Harangi - stood at approximately 23.3 tmc ft, against their capacity of 114.57 tmc ft, last week, and the dams are said to be receiving insignificant inflows.

State officials cited a demand they had raised at the CWMA meeting in May. “To protect the environment, 2.5 tmc ft of water should have been released from the Cauvery from February till May.

“However, the due share has not been received and the Karnataka government should be ordered to release the deficit of 2 tmc ft water within May.” Tuesday’s meeting was chaired by CWMA chairman Masood Husain and attended by representatives from Tamil Nadu, Karnataka, Kerala and Puducherry.

The water dispute has seen decades of negotiations between the parties in the two states.

The Government of India constituted the Cauvery Water Disputes Tribunal in 1990 to look into the matter. After hearing arguments of all the stakeholders, the tribunal delivered its final verdict February 5, 2007. It allocated 419 tmc ft of water annually to Tamil Nadu, 270 tmc ft to Karnataka; 30 tmc ft to Kerala and 7 tmc ft to Puducherry.

Karnataka and Tamil Nadu being the major stakeholders, Karnataka was ordered to release 192 tmc ft of water to Tamiln Nadu in a normal year from June to May. With two monsoons failing in most parts of Tamilnadu, there is an urgent need for Cauvery water in the state.

On Monday, Chief Minister Edappadi Palaniswami wrote to Prime Minister Narendra Modi, urging him not to grant permission to Karnataka to construct a dam across Mekedatu. Palaniswami’s Anna DMK is a solid ally of Modi’s BJP.

Tamil Nadu, especially Chennai, has been reeling under severe water crisis. ADMK leaders have been conducting poojas and havans, praying for rain, at various temples, churches and mosques across the state.

Municipal Administration Minister SP Velumani on Monday performed a rutual at a temple here in Coimbatore district and prayed at the St Mark’s Church and Hazarat Musa Avulia Dargah.

In an interaction with the media, he said groundwater level at many regions has gone down and the Palaniswamy government has made arrangements to distribute water to all water-starved areas.

The principal opposition DMK staged demonstrations with empty pots, urging the government to take steps to address the issue immediately.

Meanwhile weathermen have forecast rain for Tamil Nadu this week.

Chennai will continue to witness isolated rains, the Indian Met Department said. The city is likely to get mild showers in some areas until Thursday, bringing down the maximum temperature in the city to 37 degree Celsius. IMD has also forecast isolated showers over Tamil Nadu and Puducherry till June 28.