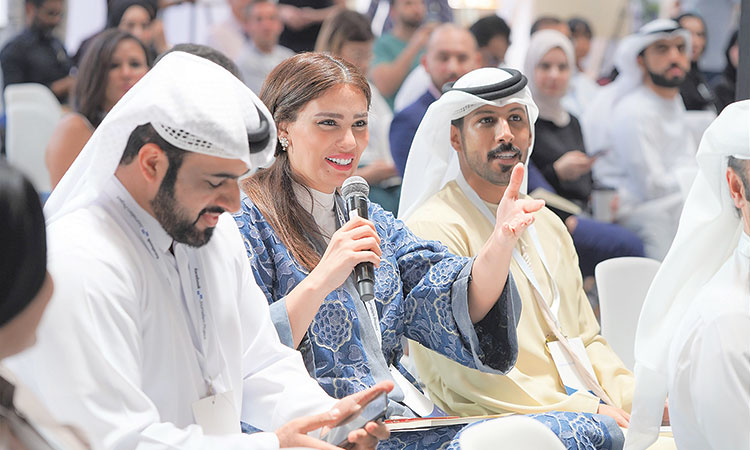 During an interaction at the Arab Social Media Influencers’ Café.

During a discussion with Fares Akkad, Facebook’s Director of Media Partnerships, Middle East, Africa and Turkey, and a group of Arab social media influencers, Akkad said that the content produced on social media is an extension of a creative individual, and what differentiates one influencer from another is their ability to interact with society and reality. The gathering was attended by a number of senior regional and global officials of Facebook.

During the session, which was moderated by Sky News Arabia TV presenter Mahra Al-Yaccoubi, Akkad pointed out that Facebook has focused on launching initiatives and programmes that ensure publishers and influencers are able to easily use the platform and utilise its various tools. He said that Facebook offers many tools that allow influencers to monetise their content.

Akkad had also stressed that Facebook always seeks to find the best alternatives and solutions for its media partners and journalists in the region and continuously works to develop the platform in order to meet the needs of influencers and support them in their work.

Speaking about how Facebook believes in the importance of prioritising the user experience, Akkad said that the platform has had to make adjustments to the algorithm to prioritise content posted from family and friends over content from publishers, with a focus on meaningful interactions. “This decision was taken upon the request of users, who wanted the platform to keep them informed about their close friends and family. Understanding these changes can help those producing news content adjust to these changes and we have offered training on how to get people to interact with a news post,” Akkad said. He added that if a news article is able to engage the audience on the platform and get more likes and shares, the post is able to get a higher ranking.

In response to a question on the usability of Facebook in the GCC, Akkad said the company was working to address feedback from GCC users on reducing the complexity of the tools. “Facebook remains the most dominant social media platform in the Arab world and the number one social media platform in the world with 2.5 billion users,” Akkad said. He further noted that 50 per cent of the world’s internet users use Facebook.

From her part, Marwa Nasser Al Koudah, Project Manager of the Arab Social Media Influencers Club, said DPC recognises the various contributions of social media influencers on social media platforms, including the positive role they are playing in serving their communities. “Here at DPC, we are keen on supporting the success of Arab social media influencers and involving them in our training programmes, which aim to provide them with valuable knowledge and develop their skills in various media fields,” she said.

She added that influencers in the region, especially Emirati influencers who have a huge following on social media, have a responsibility in spreading positivity not only in their societies but also beyond.

Meanwhile, some of the participating influencers, mainly from the GCC, said they believe Facebook can be a powerful platform to get people engaged on initiatives or campaigns based on a cause.

Akkad also shared how the social media platform has taken several policy measures to limit the misuse of the live streaming facility on Facebook through the use of Artificial Intelligence (AI). “We began to use machine learning to expand our ability to get timely help to people in need. We were able to stop around 1,500 suicide attempts through Facebook just this year.”