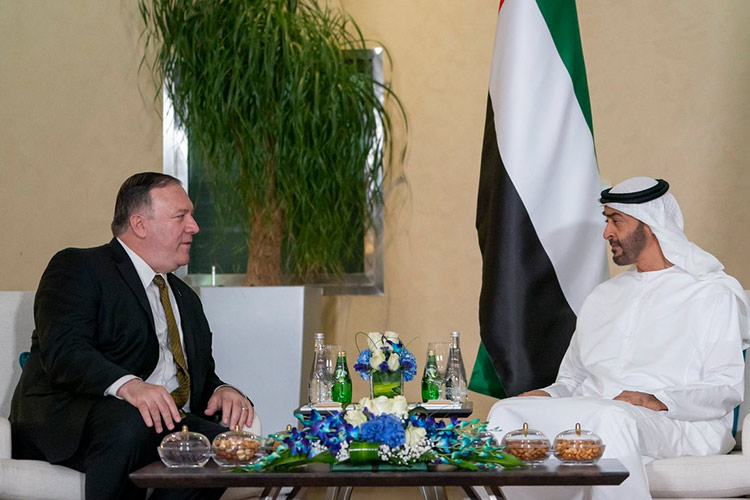 The US Mission in the United Arab Emirates said that Pompeo was to discuss "building a global coalition to counter the world's largest state sponsor of terror" during his visit to Abu Dhabi.

Pompeo arrived in the UAE capital after a visit to Saudi Arabia. A senior US State Department official earlier said the United States is building a coalition with its allies to protect Gulf shipping lanes by having "eyes on all shipping", following attacks on oil tankers that Washington has blamed on Iran.

"Freedom of navigation is paramount," Pompeo tweeted from the Saudi city of Jeddah.

The senior US official told reporters en route to Abu Dhabi that Pompeo and the US Navy is building a "Sentinel" programme for "proactive deterrence". He said a coalition of nations would provide both material and financial contributions, but did not name the countries.

Pompeo thanked King Salman for meeting on "such short notice."

Pompeo and Prince Mohammed reiterated that the "two countries stand side by side in confronting the hostile Iranian activities and in combating terrorism", the Saudi media ministry said.

The United States has protected the strait for decades with its naval Fifth Fleet based in Bahrain. Trump said on Monday that other countries, including China and Japan, should protect their own ships there.

"There will be military ships from foreign countries, from a broad coalition of countries who participate in this. I don't think they’re escorting. I think they’re observing,” the US official said.

Relations between longtime foes Iran and the United States have deteriorated since Trump withdrew Washington a year ago from a 2015 accord that curbed Tehran's nuclear programme in exchange for easing sanctions.

Trump signed an executive order on Monday targeting Iran's supreme leader and his associates with financial sanctions, the latest action the US has taken to discourage Tehran from developing nuclear weapons and supporting militant groups.

The sanctions follow Iran's downing of a more than $100 million US surveillance drone over the Strait of Hormuz. Trump pulled back from the brink of retaliatory military strikes on Iran last week, but is continuing his pressure campaign against the nation.

"These measures represent a strong and proportionate response to Iran's increasingly provocative actions," Trump told reporters in the Oval Office.

"We will continue to increase pressure on Tehran until the regime abandons its dangerous activities and its aspirations, including the pursuit of nuclear weapons, increased enrichment of uranium, development of ballistic missiles, engagement and support for terrorism, fueling of foreign conflicts and belligerent acts directed against the United States and its allies."

Trump pulled the US out of the nuclear pact that world powers made with Tehran in 2015. Other nations stayed in the deal, which eased sanctions on Iran in exchange for curbing its nuclear program. Trump called it a one-sided deal in Iran's favour and re-imposed sanctions but says he wants to negotiate a different deal. Iran, which calls the sanctions "economic terrorism," has thus far shown no interest in negotiating.

The latest round of sanctions denies Supreme Leader Ali Khamenei and senior military figures access to financial resources and blocks their access to any financial assets they have under US jurisdiction.

"For people who say these are just symbolic, that's not the case at all," Treasury Secretary Steven Mnuchin said. "We've literally locked up tens and tens of billions of dollars."

Trump said the new sanctions are not only in response to the downing of the drone. The US has blamed Iran for attacks on two oil tankers this month near the Strait of Hormuz. Citing those episodes and intelligence about other Iranian threats, the US has sent an aircraft carrier to the Arabian Gulf region and deployed additional troops alongside the tens of thousands already there.

All this has raised fears that a miscalculation or further rise in tensions could push the US and Iran into an open conflict 40 years after Tehran's revolution.