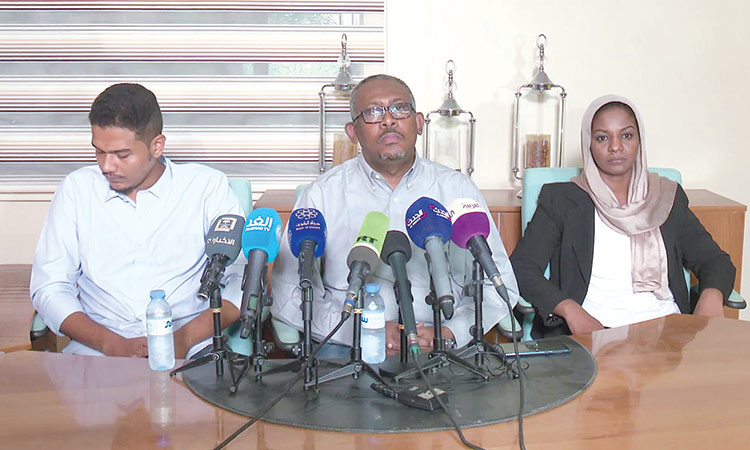 Protest leader Babiker Faisal (centre) reads out a statement saying that they have accepted the deal in Khartoum late on Saturday. Agence France-Presse

Sudanese protest leaders late Saturday said they accepted the creation of a civilian-majority governing body for a political transition in Sudan as proposed by an Ethiopian envoy.

The compromise blueprint suggests the creation of a 15-member governing body comprising of eight civilians and seven members of the military, they said.

The ruling military council has yet to give its decision on the Ethiopian proposal.

“We think that our acceptance of the proposal is a major leap towards meeting the goals of the revolution, which are freedom, peace and justice,” protest leader Babiker Faisal told reporters in a brief statement.

“It will put the country on the right track to create the transitional period that would usher in sustainable democracy.”

Of the eight civilians, seven will be from the umbrella protest movement the Alliance for Freedom and Change, another protest leader Amjad Farid had said earlier on Saturday.

A group of young protesters took to the streets in Khartoum’s twin city of Omdurman, chanting “free revolutionaries, we will keep on track.”

Ahmed, a 21-year old protester, said he would keep demonstrating until justice is served for his brother who was killed during the dispersal of the sit-in.

“I am burning inside. I want justice for my brother,” he said.

Several pick-up trucks packed with RSF were roaming around the area where the small demonstration was held in Omdurman.

Witnesses say protesters set tyres on fire in some streets in the city. Separately, a Sudanese court ordered telecoms operator Zain Sudan on Sunday to restore internet services, a lawyer said, after they were severed nearly three weeks ago when security forces dispersed protesters camping in central Khartoum.

Abdel-Adheem Hassan, a lawyer who filed his own case against Zain Sudan over the blackout, told Reuters the Khartoum District Court had ordered Zain to “immediately restore internet services to the country.”

Sudanese courts do not confirm or deny their rulings to the media.

Zain Sudan, a subsidiary of Zain Kuwait and the largest operator in Sudan, was not immediately able to comment on the matter on Sunday.

Hassan said a Zain representative had told the court in response to the petition that the company had been ordered verbally by “high authorities” to cut the internet.

A source at Zain said that the telecoms regulator had ordered the internet outage and demanded that they be added as a party to the case in an appeal.

Sudanese officials could not be reached for comment and it was unclear what impact Sunday’s court order would have.

General Salah Abdel-Khaleq, a member of Sudan’s Transitional Military Council, told the BBC Arabic service in an interview this month that internet services would be restored once those talks resumed.

The current blackout, which began on June 3, has resulted in a “near-total loss of access” for mobile and fixed line connections for most ordinary users, though connectivity had improved from 2 per cent to 10 per cent of normal levels by last Thursday, said Alp Toker of NetBlocks, a digital rights NGO.

“Data indicate that Sudan’s current internet restrictions remain more severe than those observed during the rule of Omar Al Bashir, including those applied in the final days of the regime,” Toker said in an email.

The blackout has hampered the speed and effectiveness of humanitarian operations, said Rick Brennan, regional emergencies director at the World Health Organization (WHO).

Days after the crackdown, Ethiopian Prime Minister Abiy Ahmed led the mediation between the two sides.

In previous talks before the June 3 crackdown, protest leaders and the generals had agreed on a three-year transition period and to form a 300-member parliament, with two-third lawmakers from the protest movement.

But the deputy chief of the ruling transitional military council, General Mohamed Hamdan Dagalo, dismissed that the umbrella alliance would get two-third of the lawmakers.

Dagalo, speaking at a rally of his supporters in a village outside of Khartoum, said it is “not possible” for the alliance to take two-third of parliament.